Luck, Serendipity, and Locus of Control

My friend over at The Daily Parker shared this story with me a couple of days ago: Why Luck Matters More Than You Might Think. In the article, the author talks about people who see themselves as self-made, even though luck (and by luck, I mean random happenings that are beneficial, as opposed to some systematic force like karma) is a strong influence - perhaps even stronger than individual action:


In the process, I have discovered that chance plays a far larger role in life outcomes than most people realize. And yet, the luckiest among us appear especially unlikely to appreciate our good fortune. According to the Pew Research Center, people in higher income brackets are much more likely than those with lower incomes to say that individuals get rich primarily because they work hard. Other surveys bear this out: Wealthy people overwhelmingly attribute their own success to hard work rather than to factors like luck or being in the right place at the right time.

That’s troubling, because a growing body of evidence suggests that seeing ourselves as self-made—rather than as talented, hardworking, and lucky—leads us to be less generous and public-spirited. It may even make the lucky less likely to support the conditions (such as high-quality public infrastructure and education) that made their own success possible.

Some of the greatest scientific achievements happened through luck - or serendipity, the more frequently applied term, which refers to fortunate accidents. In the field of psychology, one great example is Pavlov's concept of classical conditioning. Pavlov was a physiologist studying digestion. In his famous study, he was examining salivation - the first step in digestion - in dogs, when he noticed something interesting. The dogs actually began to salivate before they had food in their mouths. 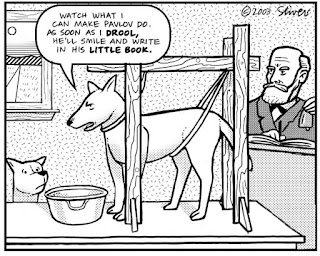 This prompted him to make observations, and he found that the dogs would begin salivating in response to cues that meant food was on its way: the sound of the lab door opening, the sight of white lab coats, and so on. In his famous experiment, he decided to test whether he could associate a neutral stimulus (the sound of a metronome - not a bell, as some state) with food (called the unconditioned stimulus - something that elicits a response without having to be learned), to elicit salivation (called the unconditioned response). His study worked, and at the sound of the metronome (the conditioned stimulus), the dogs began salivating (now called the conditioned response).

Social psychologists ascribe strong influence to external factors on our behavior. You could reword that to state that luck determines a lot of what happens to you. Some social psychologists believe in these outside influences so strongly that they deny the existence of personality altogether, and instead explain all behaviors as externally influenced. Not all social psychologists take that radical view, and of course, different subfields of psychology have different degrees of belief in luck versus internally motivated behavior.

Of course, not only do psychologists have systematic views on the roles of luck versus internal motivation, people do in general. This concept is referred to (by psychologists) as locus of control. A person who believes they are responsible for their own behavior and destiny (self-made) would have a strong internal locus of control. On the other hand, a person who believes everything that happens to them is the result of luck and external factors would have a strong external locus of control. This belief falls on a continuum, so you can fall anywhere between those two extremes. BTW, locus of control is also sometimes known as "attributional style." Once again, what we're talking about here is attribution - what caused something to happen.