The Eyes Have It

I talk a lot on this blog about the human brain, and what various parts are responsible for in terms of behavior and sensation/perception. But I don't really delve much into other body parts. However, I learned Monday about a third set of receptors in the eye that I started looking into. 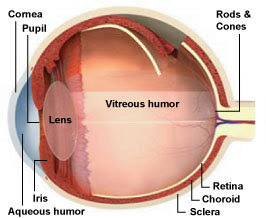 You may have learned in your biology and/or psychology class about the receptors in the retina - the rods (detecting light and dark) and cones (detecting color). But Monday I learned there is a third set of receptors: the intrisincally photosensitive retinal ganglion cells. Like rods, these receptors react to light, but are so much more sensitive, they can respond even when responses of the rods and cones are blocked (or when rods and cones are missing, as in some rare eye diseases). Their response is also much slower, and relate to light conditions over the long-term. But they have some really important roles:
These receptors help explain why people who are blind can experience sleep disturbance. If these receptors aren't functioning properly, a person's sleep-wake cycle could be affected.

Intrinsically photosensitive retinal ganglion cells were accidentally discovered in the 1920s, when geneticist Clyde E. Keeler bred mice without rods and cones (yes, they were in fact blind mice), but found they still responded to light. However, no one did anything in this line of research until the 1990s, and these specific cells weren't discovered until the early 2000s.

These cells respond mostly to blue light. It's probably no coincidence, then, that light therapy to treat sleep disturbance (as well as seasonal affect disorder) often uses blue light.
by Sara at 8:00 AM