In college, I had a pet rat named Lily. 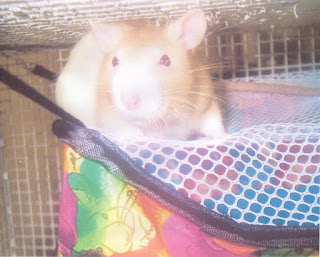 She was one of the best pets I've ever had, personable, playful, and so trustworthy, I could let her run around my apartment unsupervised, knowing she'd come when I called her. I used to play "box" with her, and sometimes, I would flop her onto her back and tickle her belly. She seemed to enjoy it, though I didn't really think I was "tickling" her so much as just playing. But some new research shows that rats really are ticklish:

The rats responded with ultrasonic vocalizations in the range of 50 kilohertz, a pitch with a “positive emotional valence,” according to the study. That frequency is too high for humans to hear, so the researchers transposed the vocalizations to lower frequencies. (Notably, none of the tickles caused rats to make utterances in the 22-kHz range, which are considered “alarm calls,” according to the study.)

In addition to the vocalizations, the rats also reacted to tickles with spontaneous Freudensprünge jumps. These jumps resemble bunny hops, with the front legs and back legs moving in tandem.

What could make this research more adorable? The fact that they have video and audio of a rat being tickled.
by Sara at 4:59 PM