As part of a small research project I'm hoping to undertake (stay tuned!), I did a little research into some of the sentiment analysis packages available in R. Sentiment analysis involves classifying words and phrases as positively or negatively valenced; people conducting sentiment analysis may also want to delve deeper into the precise emotions being portrayed, such as anger or joy. Software conducting sentiment analysis often uses previously existing lexicon databases, that have already done the work of classifying words as portraying different sentiments. One example is the NRC Word-Emotion Association Lexicon, developed through crowd-sourcing on Mechanical Turk; it offers the following sentiments: negative and positive; and emotions: anger, anticipation, disgust, fear, joy, sadness, surprise, and trust.

But as I was looking into details on sentiment analysis for this project, which will include analysis of writing, I stumbled upon this article about sentiment in fiction - specifically how do commercial novels differ from literary fiction (the "greats") in terms of sentiment? They begin the article by offering a summary of what critics and great writers have to say on the subject, which is that to be considered great fiction, you need to limit sentimentality in your writing. To answer the question more fully, though, they conducted a sentiment analysis of 2,000 published novels across 10 non-mutually exclusive categories: Classics, Mystery, Literary Prize-Winners, Bestsellers, Reviewed by New York Times, Science Fiction, Most Widely Held in Libraries Published Since 1945, Young Adult Fiction, Romance, and Victorian novels:


The more a novel contained strongly positive or negative words (abominable, inept, obscene, shady, on the one hand, admirable, courageous, masterful, rapturous on the other), the higher its score. However complex literary sentimentality may be, the assumption is that in order to be sentimental at a minimum you need a sentimental vocabulary.

Below you see a comparison of the varying levels of sentimental vocabulary in each of our 10 categories. The most telling aspect of the graph is the way the novels of the nineteenth century (labeled “VIC”) represent an altogether different world in terms of sentimentality. These are the novels of Charles Dickens, Mary Shelley, Anthony Trollope, Emily Bronte, and their contemporaries. To give you an idea of what this difference is like, the average amount of sentiment vocabulary in the nineteenth-century novels accounts for just under 7% of all words in a given novel. For prizewinning fiction from the past decade, by contrast, that number is about 5.5%. This means that for a given novel of 100,000 words (about the length of Pride and Prejudice), a reader will encounter on average 1,500 more sentimental words, or about seven and half more per page. That’s an enormous difference from a reader’s perspective. In this sense, one could see our current antipathy to sentimentality as a longstanding reaction to a distinct moment in the novel’s history when emotion reigned. 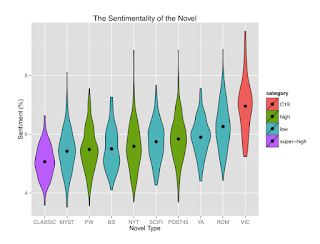 The other noticeable feature about this graph is the way it is not well-sorted according to our distinctions between “high” and “low” categories (“popular” and “serious” might be another way to label them). Some popular genres like Romance, Young Adult Fiction (YA), and Science Fiction (the latter being surprising to us) do use sentimentality to a higher degree than so-called highbrow novels reviewed in the New York Times (NYT) or those that win literary prizes (PW). (Here the difference is significant though less extreme – Romances for example use about 0.75% more sentimental words than prizewinners, or roughly 3-4 more per page.) On the other hand, the most widely held novels in libraries since 1945 (POST45) use levels of sentiment on par with more popular categories like SciFi and YA fiction, just as our high-brow categories like New York Times novels and Prizewinning novels show no difference with more popular groups like the Bestsellers or the Mysteries.

So what is their overall message for hopeful authors, like myself?


Our advice to writers? Based on the available evidence, if you want to write one of the fifty most important novels in the next half-century, then by all means avoid sentimental language. But if you want to get published, sell books, be reviewed, win a prize or simply make someone happy, then emote away and just write a good novel.