Feed the Trolls, Tuppence a Bag

Actually, don't - really don't - feed the trolls. But if you're going to, try to collect some data from them while you're at it. For anyone who regularly reads the comments, you've likely witnessed the same thing the author of this post, Christie Aschwanden, discusses:


I’d just written a short article that began with a quote from the movie “Blazing Saddles”: “Badges? We don’t need no stinkin’ badges!” After the story published, I quickly heard from readers explaining that, actually, the quote was originally from an earlier movie, “The Treasure of the Sierra Madre.” The thing was, I’d included that information in the article.

In fact, research suggests many people share articles without actually having read them. It seems pretty likely they comment on them without fully reading either. These frustrating incidents got Aschwanden thinking - what makes people comment on an article? To answer this question, she analyzed comments on FiveThirtyEight and collected survey data from 8,500 people. My only complaint is that, though they had a really large sample to work with, their key question was open-ended, so they randomly sampled 500 to qualitatively analyze and categorize. (It would have been awesome if they could have done something with natural language processing - but I digress). Here's what they found from their main question - why people comment: 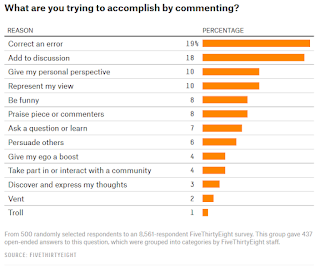 The top category was to correct an error - this might explain why so many people comment without seeming to have read the article. Either they jumped down to the comment section as soon as they read what they thought was an error (therefore missing information later on) or are so fixated on what they feel is an inaccuracy, they stop really comprehending the rest of the article. They did include a similar close-ended, multiple response item later on that includes the full sample, and the top category was related to "correcting an error" - people are most likely to comment when they know something on the subject that wasn't in the article (although, as demonstrated in Aschwanden's stories, sometimes that information is there): 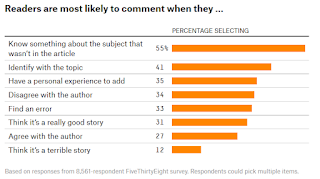 She offers a few explanations for some of the unusual commenting behavior, including my old pal, the Dunning-Kruger effect. She also reached out to some of FiveThirtyEight's top commenters. Interesting observation (that I'm just going to throw out there before I wrap up this post, because I'm more interested in what you guys think of this): most of the survey respondents (over 70%) and all of the top commenters were men. Thoughts? Speculation on why?
by Sara at 2:25 PM