It's All About Popular

Popularity gets you far. Being liked by others means people will go out of their way to please you, and try to link themselves to you in some way, so that they too can benefit. On the other hand, we distance ourselves from unpopular people, to try to salvage our own self-esteem and sense of belonging. In social psychology, two concepts get at this notion of linking ourselves to the popular and successful and distancing ourselves from the unpopular and unsuccessful: basking in reflected glory (BIRGing) and casting off reflected failure (CORFing), respectively. So what happens when the leader of the US is so unpopular?

FiveThirtyEight explored this notion of popularity with regard to the recent presidential election. It shouldn't come as a surprise, based on his treatment in the media, that Donald Trump is the least-liked presidential candidate in recent history. What is unusual is that he won despite this fact:


[I]t would be wrong to look at the 2016 election results and conclude that favorability ratings are irrelevant. Trump actually did about as well nationally as you’d expect, given his and Hillary Clinton’s favorability ratings. She was a little more popular than he was and she will probably win the national popular vote by a couple of percentage points. In state after state, people who had a favorable view of Clinton generally voted for her, and people who had a favorable view of Trump generally voted for him.

But here’s the deciding factor: The group that made the difference turned out to be people who disliked both candidates. They swung toward Trump, giving him the White House.

Now, it's likely that Trump's favorability rating will improve after his inauguration, a relationship that has been observed in recent elections: 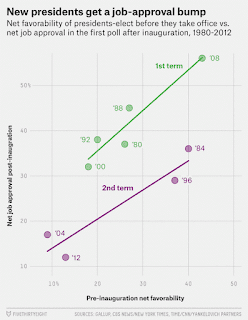 Still, even if Trump gets a 20-point bump, the highest post-inauguration bump observed in recent history, that would only get him to +7. The last time an incoming president had that low of a rating was FDR when he entered his third term in 1941. That would be a difficult year for FDR and the US, as in that year the US experienced the bombing of Pearl Harbor - which some leaders blamed on FDR. Of course, it can be argued that FDR won his fourth term because the US was at war, and people don't tend to want a leadership change during that kind of conflict.

It's unclear exactly what will happen during the Trump administration, but what we can guess from past data is that he's going to experience roadblocks, which will only get worse if/when his favorability slides even lower.
by Sara at 1:21 PM