Recently, many people, including myself, have commented on how divided things have become, especially for any topic that is even tangentially political. In fact, I briefly deactivated my Facebook account, and have been spending much less time on Facebook, because of the conflicts I was witnessing among friends and acquaintances. But a recent study of community interactions on Reddit suggests that only a small number of people are responsible for conflicts and attacks:


User-defined communities are an essential component of many web platforms, where users express their ideas, opinions, and share information. However, despite their positive benefits, online communities also have the potential to be breeding grounds for conflict and anti-social behavior.

Here we used 40 months of Reddit comments and posts (from January 2014 to April 2017) to examine cases of intercommunity conflict ('wars' or 'raids'), where members of one Reddit community, called "subreddit", collectively mobilize to participate in or attack another community.

We discovered these conflict events by searching for cases where one community posted a hyperlink to another community, focusing on cases where these hyperlinks were associated with negative sentiment (e.g., "come look at all the idiots in community X") and led to increased antisocial activity in the target community. We analyzed a total of 137,113 cross-links between 36,000 communities.

Conflicts are initiated by active community members but are carried out by less active users. It is usually highly active users that post hyperlinks to target communities, but it is more peripheral users who actually follow these links and particpate in conflicts.

So even though the conflict may appear to be a widespread problem, it really isn't, at least not on Reddit. Instead, it's only a handful of users (trolls) and communities. Here's the map they reference in their summary: 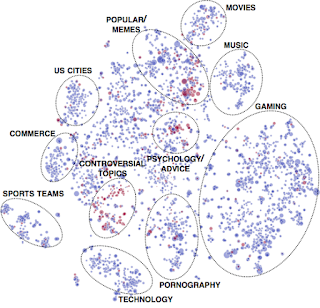 The researchers will be presenting their results at a conference next month. And they also make all of their code and data available.
by Sara at 12:45 PM