Like last year, I participated once again in the NYC Midnight Short Story Challenge. And like last year, I've advanced to round 2 of the competition. My short story - my first attempt at historical fiction - came in 3rd in my heat: 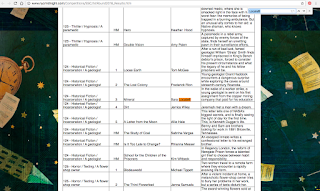 Round 2 assignments are released tonight, and I'll have the weekend to write a 2000 word story. I'm also still preparing for Blogging A to Z, which starts Sunday. A, B, C, H, and I plus a Statistics Sunday post are already written and scheduled, and I'll be putting together more in the next couple days. Basically, it seems I'll have a writing-filled weekend.

Also in April, I'm hoping my 500 word submission will show up in the WRiTE CLUB bouts. I sent in my 500 word submission along with my penname a couple of weeks ago. I learned yesterday that I won't receive any notification of whether my submission will appear - I have to check every day during the contest to see if I appear in a faceoff, which is a great way to encourage us to participate and vote. I also can't share if my submission appears, since I can't drive votes for my own submission (doing so would get me disqualified). But you can track the contest along with me. I'll share the direct link to the contest once it's released. If I advance, I'll have the opportunity to submit another 500 words later on.

Keep an eye out for some changes to Deeply Trivial in the next few days!
by Sara at 8:29 AM

Email ThisBlogThis!Share to TwitterShare to FacebookShare to Pinterest
Labels: blogging a to z, writing