Statistics Sunday: What Are Degrees of Freedom? (Part 2)

Last week, in part 1, I talked about degrees of freedom as the number of values that are free to vary. This is where the name comes from, of course, and this is still true in part 2, but there’s more to it than that, which I’ll talk about today.

And in fact, I’ve seen that suggested before. It could work in simple cases, but as many statisticians can tell you, real datasets are messy, rarely simple, and often require more complex approaches. So instead, we teach concepts that become relevant in complex cases using simple cases. A good way to get your feet wet, yes, but perhaps a poor demonstration of why these concepts are important. And confusion about these concepts - even among statistics professors - remains, because some of these concepts just aren't intuitive.

Degrees of freedom can be thought as the number of independent values that can be used for estimation.

Statistics is all about estimation, and as statistics become more and more complex, the estimation process also becomes more complex. Doing all that estimating requires some inputs. The number of inputs places a limit on how many things we can estimate, our outputs. That’s what your degrees of freedom tells you – it’s how many things you can estimate (output) based on the amount of data you have to work with (input). It keeps us from double-dipping - you can't reuse the same information to estimate a different value. Instead, you have to slice up the data in a different way.

Degrees of freedom measures the statistical fuel available for the analysis.

For analyses like a t-test, we don’t need to be too concerned with degrees of freedom. Sure, it costs us 1 degree of freedom for each group mean we calculate, but as long as we have a reasonable sample size, those 2 degrees of freedom we lose won't cause us much worry. We need to know degrees of freedom, of course, so we know which row to check in our table of critical values – but even that has become an unnecessary step thanks to computer analysis. Even when you’re doing a different t-test approach that alters your degrees of freedom (like Welch’s t, which is used when the variances between your two groups aren’t equal – more on that test later, though I've mentioned it once before), it’s not something statisticians really pay attention to.

And if you venture into even more complex approaches, like structural equation modeling (one of my favorites), you’ll notice your degrees of freedom can get used up very quickly – in part because your input for SEM is not the individual data but a matrix derived from the data (specifically a covariance matrix, which I should also blog about sometime). That was the first time I remember being in a situation where my degrees of freedom didn't seem limitless, where I had to simplify my analysis because I had used up all my degrees of freedom, and not just once. Even very simple models could be impossible to estimate based on the available degrees of freedom. I learned that degrees of freedom isn’t just some random value that comes along with my analysis.

It’s a measure of resources for estimation and those resources are limited.

For my fellow SEM nerds, I might have to start referring to saturated models – models where you’ve used up every degree of freedom – as “out of gas.”

First, remember that in ANOVA, we’re comparing our values to the grand mean (the overall mean of everyone in the sample, regardless of which group they fall in). Under the null hypothesis, this is our expected value for all groups in our analysis. That by itself uses 1 degree of freedom – the last value is no longer free to vary, as discussed in part 1 and reiterated above. (Alternatively, you could think of it as spending 1 degree of freedom to calculate that grand mean.) So our total degrees of freedom for ANOVA is N-1. That's always going to be our starting point. Now, we take that quantity and start partitioning it out to each part of our analysis.

Let’s revisit the movie theatre example from the ANOVA post.

Review all the specifics here, but the TL;DR is that you're at the movie theatre with 3 friends who argue about where to sit in the theatre: front, middle, or back. You offer to do a survey of people in these different locations to see which group best enjoyed the movie, because you're that kind of nerd.

If we want to find out who had the best movie-going experience of people sitting in the front, middle, or back of the theatre, we would use a one-way ANOVA comparing 3 groups. If k is 3, our between groups degrees of freedom is 2. (We only need two because we have the grand mean, and if we have two of the three group means - the between groups effect - we can figure out that third value.)

This is part of the trade-off we have to make in analyzing data – trade-offs between simplicity and explaining as much variance as possible. In this regard, degrees of freedom can become a reminder of that trade-off in action: what you’re using to run your planned analysis.

It's all fun and games until someone runs out of degrees of freedom. 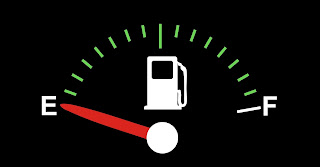