The Continuing Saga of the Independent Bookstore

This morning, I listened to a great podcast by Annotated that discusses independent bookstores. Despite the closing of many small and large bookstores after the introduction of Amazon and e-books, independent bookstores are apparently making a resurgence. Not only that, they're working together and sharing best practices. Since the nature of an independent bookstore is to sell books within a neighborhood, shops in different areas have no need to feel competitive with each other, making for a more collaborative dynamic.

Guest Oren Teicher of the American Booksellers Association shares that it's a great time to get into the independent booksellers market, but cautions against one of my favorite fallacies (which I first encountered in the literature on online resources for patients): the Field of Dreams fallacy - essentially, "If you build it, they will come."

Instead, the hosts of the podcast, Jeff and Rebecca, discuss the need for community engagement and becoming a fixture of the community. People won't simply show up because a store is open for business, and especially for small shops, which people may fear will go out of business and don't want to get attached to, you need to establish the business as part of people's routines and ensure that you're the place people think to go when they realize they want to purchase a book. Even though as a nation, we are moving back to independent bookstores for some of our book needs, there will still be a lot of variation across individual communities. Simply because independent bookstores as a whole are able to compete in the current market doesn't mean that individual bookstores will be able to stay in business. 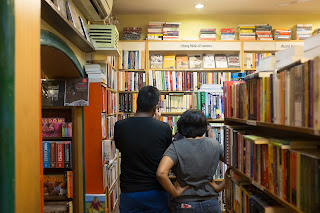