Booze News and the Issue of Bias in Scientific Research

Via The Daily Parker, a new study is going to examine the question of whether alcohol is good for you:


Now the National Institutes of Health is starting a $100 million clinical trial to test for the first time whether a drink a day really does prevent heart attacks. And guess who is picking up most of the tab?

Five companies that are among the world’s largest alcoholic beverage manufacturers — Anheuser-Busch InBev, Heineken, Diageo, Pernod Ricard and Carlsberg — have so far pledged $67.7 million to a foundation that raises money for the National Institutes of Health, said Margaret Murray, the director of the Global Alcohol Research Program at the National Institute on Alcohol Abuse and Alcoholism, which will oversee the study.

The international effort to study the benefits and risks of alcohol will recruit nearly 8,000 volunteers age 50 or older at 16 sites around the world, starting at medical centers in the United States, Europe, Africa and South America. Participants will be randomly assigned to quit alcohol altogether or to drink a single alcoholic beverage of their choice every day. The trial will follow them for six years to see which group — the moderate drinkers or the abstainers — has more heart attacks, strokes and deaths. The study organizers conceded that it would be a challenge to recruit volunteers, who will not know in advance whether they will be assigned to abstain or be required to drink. Those in the drinking group will be partly reimbursed for the cost of the alcohol.

Obviously, it's concerning when companies with everything to gain from the research provide the funding. Not only that, but many of the researchers involved have pre-existing relationships with different manufacturers. There are still ways that the research could be conducted in an unbiased way, and the issue of how bias impacts research is one of the components of different philosophy of science perspectives. That is, the question of whether we can truly know reality through the scientific method and whether complete impartiality is necessary to measure reality has been a topic of philosophical debate for centuries.

It's also important to note that, while the researchers' relationships with various organizations may signal bias, these relationships are also due to the fact that these researchers are well-established and respected in this area of research. Sure, someone without these ties might be more impartial, but they also don't have the previous experience and knowledge to conduct this type of research. And granting agencies always look for a track record, and would rarely fund studies in a topic new to the particular researcher - and certainly not large, multi-year, multi-site studies such as this.

The more interesting issue, though, is the pledging of private funds to NIH. Obviously, this has been going on before now, but I think this will be a new trend in scientific research - as our government continues to pull funds and slash budgets of scientific granting agencies, you'll see more and more research being conducted and/or funded by private organizations. True, this introduces bias, because few private organizations will fund research that does not benefit them. But when the choice is no money or money with potential strings attached, I can imagine what most researchers will choose - the option that might feel dirty, but is better than being out of a job.

In other news, I can't believe I don't have a "beer" label for my blog. That must be remedied... 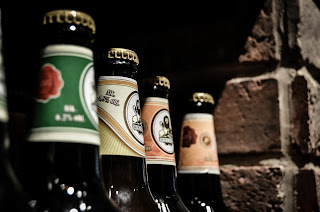