What's In A Name?

We're now well into March, which is, among other things, Women's History Month. And while women today have many more opportunities and rights, women are still being treated differently in sometimes unnoticeable ways. Take this story, making the rounds recently, about a man who used his female coworker's name in his emails for two weeks and learned what women workers often experience: 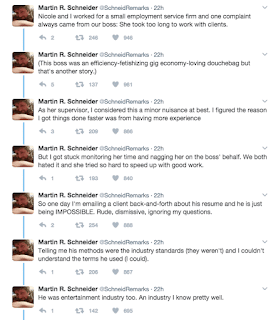 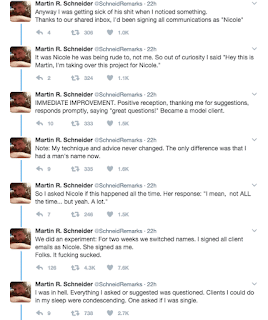 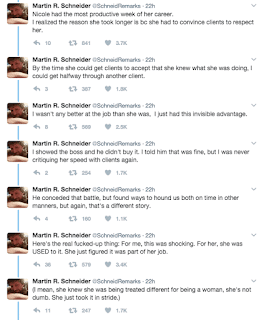 I will say that I'm fortunate in that I don't really deal with this kind of sexism - in the form of constantly being questioned and doubted - in my current job. In fact, I feel very valued and respected in my job, perhaps in part because I'm in a highly specialized field, have a doctorate, and was recently hired because of my expertise. And I feel especially fortunate feeling this way given that my current job is male-dominated. It's not unusual for me to sit in meetings where I am the only woman.

I usually experience it in different ways: people asking my husband what he does for a living but asking me if I "work at all"; having people assume I don't understand technical or scientific topics; and sometimes being outright ignored when in a social conversation with a group of men. I want to stress that this usually happens in situations with people who don't know me as well. I also noticed at my previous job that while men would be referred to by their title (usually Doctor), women would be referred to by their first names, even when their title was also Doctor. So I do feel much more valued and respected at my current job than my previous one.

The problem is that these behaviors are usually very mundane and difficult to spot by a casual onlooker. The people behaving in sexist ways would probably vehemently deny that they are sexist, and in part they're right - they probably wouldn't make disparaging comments about women as a group or profess any "woman-hating" attitudes. They don't exhibit active sexism. Their sexism is instead more passive and indirect. They change their behavior in small, maybe even unnoticeable ways, when dealing with women versus men: being more skeptical, acting more aggressively in negotiations, forgetting to use a proper title, and so on. But it's still sexism.
by Sara at 2:38 PM