Carmen at the Lyric

Last night, I went to see Bizet's Carmen at the Lyric Opera of Chicago. The production was set in 1930's Spain, and contained a lot of dance, including some interesting choreography involving a dancer in a bull mask. The bull became a recurring theme throughout the show, showing up in scenes and following Carmen around or dancing off to the side. (BTW, John von Rhein of the Trib found the dance additions distracting and hated the bull.) 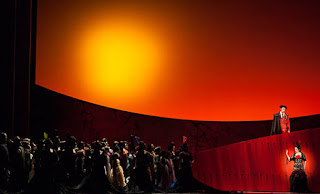 If you're not familiar with the story: The opera takes place in Spain. Carmen is a Gypsy, working in a cigarette factory. A group of soldiers, including Corporal Don José, are hanging around outside as the girls come out of the factory for their break. Everyone is enthralled by Carmen, except Don José, who sits to the side ignoring her. She chooses him as the object of her affection, throwing him a rose. Later, when she is arrested for attacking a fellow factory worker, she seduces Don José, who lets her go and is instead imprisoned for dereliction of duty. Later, Carmen talks Don José into running away from his duties and joining the revolutionaries in the mountain.

Carmen and Don José are not well-matched - Carmen is free-spirited while he is jealous and controlling. They continue to clash in the mountains. She urges him to leave and go back to his mother and childhood sweetheart. He refuses, though ultimately does leave when he learns his mother is dying. Carmen runs away with Escamillo, a toreador (bull fighter). Don José finds Carmen at a bull fight, confronts her for leaving him, and murders her.

The bull is meant to symbolize fate, something Carmen cannot escape, as she learns when she reads her fortune and finds that no matter how many cards she draws, the outcome is always her death. Don José is portrayed as a naive man seduced by the Gypsy, who ultimately brings about his downfall.

Honestly, what I got from the story was not that Don José was naive - he struck me as an authoritarian. He has very specific expectations about how men and women should behave. He is enthralled by the free-spirited Carmen, who forces him to break the rules, something he finds very uncomfortable. But I think the main reason he is so enthralled by her is that he sees her as a creature he seeks to tame and change. In some ways, she is the bull and he is the toreador. So perhaps his naivety is his belief that he can simply tame the bull. But the toreador's goal is to kill the bull. In that way, the bull appearing throughout the production is not simply fate, but a symbol of Carmen herself. The show is choreographed such that Carmen and Don José are encircling each other, center stage, while to the side the bull dancer and toreador dancer are similarly facing off. In fact, Carmen as the bull is one more reason that the outcome, Carmen's death, is inevitable - it's what the toreador must do or else die himself.

The show is closing this weekend, though it appears the remaining performances are sold out, so if you'd like to see it, hopefully you've already purchased tickets!
by Sara at 10:25 AM