How to Get People to Read the Terms & Conditions

How can you get people to actually read the 20,699-word iTunes terms & conditions? Turn them into a graphic novel, of course: 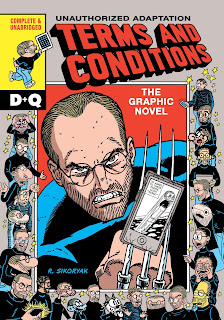 It is rare to find someone who has a favourite line in the iTunes terms and conditions, but Robert Sikoryak does. “Oh boy, where is it?” he says, scanning his book, before beaming and reciting: “You also agree that you will not use these products for any purposes prohibited by United States law, including, without limitation, the development, design, manufacture, or production of nuclear, missile, or chemical or biological weapons.” He chuckles. “It’s pretty startling, isn’t it?”

Sikoryak’s latest graphic novel, Terms and Conditions, is like a great piece of conceptual art: dazzling to behold, if more than a little perplexing. Its panels of text and dialogue are word-for-word true to the 20,669-word terms and conditions, published by iTunes in 2015 (Apple has since adopted a lighter 7,000-word version).

Sikoryak has been praised by some for making T&Cs more accessible, which he finds baffling. He just enjoys the challenge of making something dismissed as unreadable readable. In his eyes, convincing someone to read terms and conditions is just like getting someone to read “worthy” classics they feel guilty about skipping, from Camus to Beckett and beyond. “I like using texts that are perceived as important,” he says, “and that includes iTunes T&Cs. All my work is an attempt to bridge the gap between what we call high art and low art, what we think is important or serious, and what we see as frivolous and meaningless. Often, that boundary doesn’t exist.”

He’s now working on adapting the work of the ancient Roman poet Catullus into comics, as well as The Unquotable Trump, a series of comic book front pages, in the style of everything from horror comics to superheroes, designed around quotes by the US president.

Speaking of words, imagine playing Scrabble with this kid: 5-year-old Edith Fuller who won the Scripps Green Country Regional Spelling Bee and will be going to the Scripps National Spelling Bee. She is the youngest person to ever advance to nationals.
by Sara at 1:57 PM