The News Makes Me Sad

There are many events in recent days that have made me very sad. But the reactions have given me hope that there is still good in the world.

A couple of weeks ago, the sentence for Brock Turner, a man convicted of three counts of sexual assault, was announced - even though the crimes could carry a 14-year sentence, and the prosecution requested 6 years, Turner was sentenced to only six months. His victim read a letter about what effect this event had on her, her family, and her life.

Turner's parents, on the other hand, wrote letters talking about how their son won't eat steak anymore, how much student loan debt his siblings have, and that the family doesn't feel like decorating their new house.

While I was heartbroken to hear about this slap on the wrist, I was relieved to see I was not alone in finding the sentence unjust.

I'm reminded of an episode of one of my favorite shows, Six Feet Under. If you've never seen the show, it's about a family-run funeral home. Someone dies at the beginning of each episode, usually (but not always) the person for whom a funeral will be arranged. One episode began with a young woman leaving a club. She dug her keys out of her purse, and walked nervously across the street. Suddenly, two men appear some distance behind her and cat call her. She begins to walk faster. The two men pursue, asking where she's going. She begins to run. Not paying attention to anything beyond getting away from the two men, she is hit by a car and killed.

It turns out the two men were her friends, playing a joke on her. As they talk about the incident later, they tearfully ask why she was so afraid.

I had a similar experience last night. I was walking home from a late dinner, around 10pm, trying to get my last steps of day. A car pulls up next to me as I'm waiting for the light. I hear a young man's voice say "Hey, want a hit?" (or whatever they were smoking), followed by "Want a ride?" I ignore him, praying that he won't say anything else or escalate. I wait impatiently for the light to change, thinking about what my response would be if he says something else, or if the friend with him I can hear laughing will join in. Knowing that my response could just as easily anger them and cause them to escalate as get them to leave me alone.

The light changes and I hurry across the street. They wait a moment, then turn and drive down another street.

I took self-defense classes in college, skills I pray I never have to use. I try to stay aware of my surroundings, and avoid being distracted, hoping that I'm just being overly cautious. But I also don't blame women when the worst happens. And it will continue to happen as long as we try to pin some blame on women for what another person did. We don't ask victims of other crimes why they had so much to drink, why they were wearing that outfit, why they were walking alone.

As I said, I was pleasantly surprised at the number of people I know who jumped to the defense of the victim, and commented on the injustice that Turner's sentence was so lenient. This could have been a textbook case of victim blaming. Instead, it got people talking - honestly - about sexual assault and how we need to focus our attention on the man's behavior instead of the woman's.

While we were still reacting to the sentence, the shooting in Orlando happened. As with the Turner case, I was glad to see the outpouring of support from many people I know. Unfortunately, the event is also fueling debate, with many people failing to see that the fact that a man who was under investigation by the FBI for connections to terrorists was able to acquire a gun should be a sign that we need stricter gun control.

I continue to be sad. But I'm not alone. As I was driving home yesterday evening, I drove through downtown of my neighborhood, and noticed the flags of Brookfield at half-mast: 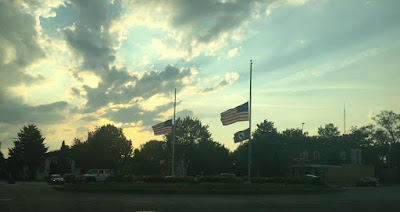