It's been said that there are two certainties in life: death and taxes. While there isn't a lot of media about the latter (a notable exception is, of course, Stranger than Fiction, which is really about both), there are many dealing with the former. I've noticed some thematic similarities between some of these works, such as between the play Our Town and the film American Beauty, something I've been meaning to sit down and write about.

But today, I wanted to write about one of my favorite movies, that I discovered completely by accident (thank you, Netflix recommendations!): Dead Man, a 1995 psychedelic western starring Johnny Depp. If you've never seen it, I highly recommend it. Just know that you're in for a trip, if you do. In many senses of the word. You may not want to read this review if you plan on watching the film, though, because there are some spoilers. 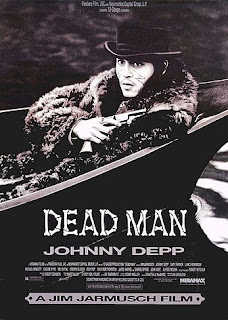 The movie begins by introducing us to a young man named William Blake (yes, really, and no, not that one... maybe), an accountant from Cleveland on his way to the town of Machine, to begin a job he was offered by mail. Unfortunately, when Blake arrives at the company to accept his job, he is told by the owner, John Dickinson, that the position has already been filled and leaves the office at gunpoint. He helps out a young woman (and former prostitute), Thel, who is being manhandled by some of the rougher elements of Machine and goes back to her room with her. We next see them laying in bed, chatting, when Thel's ex, Charlie, walks in. In a jealous rage, Charlie tries to shoot Blake but Thel jumps in the way. The bullet goes through Thel, killing her, and embeds in Blake's chest. Blake shoots and kills Charlie, then realizing that the scene does not look good for him, runs away.

We find out Charlie is John Dickinson's son. He knows that Blake is the killer - how, we never really find out, but surprisingly, I don't think that's a plot hole because... well, you'll see. Dickinson sends three mercenaries after Blake. Blake stumbles into the wilderness and passes out - he does have a bullet in his chest, after all. He awakens to find a Native American man (whose name, we learn is "He who talks loud, saying nothing" and who goes by "Nobody") trying unsuccessfully to remove the bullet.

Nobody tells Blake that there is "some of the white man's metal" in his chest and that he will probably die. Nobody asks his name, and, as a fan of William Blake's poetry, decides that Blake is actually William Blake's (yes, that one) spirit wandering and that Nobody has to help him get to the afterlife. (In fact, Nobody is so-named because he was the child of members of two opposing tribes, and was kidnapped, raised, and schooled by white Europeans; this is where he learned William Blake's poetry. The name "Nobody" also leads to some jokes in the film, like when someone asks who Blake is traveling with and he says, "Nobody.")

Together they travel west, toward the entrance to the spirit world (according to Nobody). On the way, they encounter many people after Blake because of the large bounty, and Blake is able to escape by killing most of them, including two US Marshalls. Even though he shows no concern about taking human lives, he mourns over a dead fawn, who was shot by one of the Marshalls, and paints his face with its blood. Meanwhile, one of the more ferocious mercenaries kills the other two, so he can keep the full reward. In fact, few people in the film seem to show concern for human life, and cannibalism is also a recurring theme.

Blake is shot again during one of his encounters, leaving him near death. Nobody takes Blake to a Makah village, where he performs final rituals, and puts Blake into a boat to take him to the afterlife. From the boat, Blake sees the remaining mercenary approaching Nobody. Too weak to cry out, Nobody is shot by the mercenary, though Nobody is able to shoot and kill the mercenary before dying. Blake looks up at the sky and dies.

Though the movie received mixed reviews, with Roger Ebert giving only 1.5 stars (saying, "The [writer-director] is trying to get at something here, and I don't have a clue what it is"), it is well-regarded for its portrayal of Native American culture. It avoids common stereotypes, and even uses, accurately, two Native American languages (Cree and Blackfoot). Those languages are not subtitled, so that people who understand the languages get an extra inside joke. In fact, so many elements of the film are so well thought out, this is the reason I don't think apparent plot holes are actual holes, but instead signs that there is more going on than it appears on the surface.

From the moment Blake arrives in Machine, the events of the film are almost surreal. The train fireman (a bit part played by Crispin Glover) cautions Blake that Machine is a rough town, but speaks to Blake as though he knows him and knows everything about him. It reminded me a little of Tom Stoppard's play, Rosencrantz and Guildenstern Are Dead, where the opening scene (with Rosencrantz getting 92 heads in a row) is our first sign that something is wrong with the world (that is, the characters may not be in our world, but another one, where the usual rules don't apply).

Blake's reaction to the fireman, and just about everything else that happens to him, is very stoic. His emotions are almost muted, as though he is just a shadow of his former self. He is at first ignorant of William Blake the poet, failing to recognize verses Nobody recites, but later on, embraces the name, even asking people during his drug-induced vision quest if they are a fan of his poetry.

My theory is that the film is an allegory for death, perhaps even the portrayal of a literal spirit journeying into the afterlife. It may even be purgatory, with the mercenaries serving as demons trying to drag Blake to hell, while Nobody is an angel trying to help Blake get to heaven. This might explain the disregard for life and recurring theme of cannibalism - feasting on the flesh. As Blake gets better at escaping the demons, through Nobody's guidance, he shows more appreciation for nature, which many religions view as the embodiment of god on earth. In fact, even the name of the film (which true, could refer to the fact that Blake is mortally wounded and essentially already a dead man) could imply that the main character is already dead, and that whole movie is about a dead man (a spirit).

Every time I watch the film, I take away something new. There are many layers and subtleties in the film. If you do watch (or have already seen it), let me know your thoughts!
by Sara at 10:30 AM