The American Journal of Managed Care shared a press release on new research finding that medical error is the third leading cause of death in the United States:

Then they used hospital admission rates from 2013 and extrapolated that based on 35,416,020 hospitalizations, there were 251,454 deaths from medical error, which translates to 9.5% of all deaths each year in the United States.

This is a shocking statistic, although one I've heard before. In fact, based on previous discussions in my job, medical errors have been the third leading cause of death for some time now.

To be clear, though, I should first state what medical errors are. The article linked above sums it up as follows:

Medical error is defined as an unintended act either of omission or commission or one that does not achieve its intended outcome; the failure of a planned action to be completed as intended (an error of execution); the use of a wrong plan to achieve an aim (an error of planning); or a deviation from the process of care that may or may not cause harm to the patient.

This is, of course, a rather long way of defining medical error. Essentially, what it comes down to is not giving the patient the care he or she needs to get better. That could mean misdiagnosis, resulting in a care plan that would be right if the diagnosis were correct. Or it could mean prescribing something that the patient can't do for some reason - like putting a strong onus on the patient to self-manage a condition that doesn't work with the patient's time, ability/knowledge, or finances. Or it could mean missing something entirely - thinking a patient is well when he or she is actually very sick.

The problem comes down to differing expertise. The doctor is an expert in the field of medicine. The patient is the expert about him or herself. Unfortunately, if there is not enough overlap in knowledge, the patient won't know what information to share and the doctor won't know what to ask about.

A coworker of mine recently published a book with a colleague on research he has been conducting for many years now. 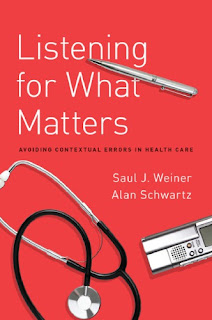 The basic premise of the research is on contextualized care; this refers to care that is guided by the patient's context, everything happening outside of the patient. Many physicians still focus on what happens within the patient. To use an example from the book, a patient may show up in the physician's office with sudden and drastic weight loss, leading the physician to assess for things like cancer. But if the patient doesn't say that he lost his job and can't afford to eat, the physician may be looking at the wrong thing. This is referred to as a "contextual error."

The research began with unannounced standardized patients - actors trained to portray a specific type of patient, who attend an office visit as though they are a regular patient. These patients wore hidden recorders to record what happened during the appoint. In the research, they found that even when the patient dropped hints as to why he had lost so much weight (e.g., homeless), he was often sent for tests to find a biomedical cause (e.g., a full cancer workup). In fact, overall in this first study, when the underlying explanation for the patient's complaint was contextual, physicians made errors 78% of the time.

They later moved to using real patients, who agreed to serve as "secret shoppers." And they've been using this line of study to provide feedback to physicians and other medical staff on how to improve care. If you're at all interested in the topic, I highly recommend this book.
by Sara at 8:00 AM