More About Self Theories: It's Not About Views on Success, But Views on Failure


Our findings indeed show that parents who believe failure is a debilitating experience have children who believe they cannot develop their intelligence. The findings further suggest that this is because these parents react to their children’s failures by focusing more on their children’s ability or performance than on their learning. Taken together, our findings seem to have identified a parental belief that translates into concerns and behaviors that are visible to children and that, in turn, shape children’s own beliefs.

It is easier - although maybe not easy - to be watchful about the kind of compliments one gives to children, but when your child has failed at something and he/she is upset, it's more difficult to think rationally about the right response. In those situations, we tend to just react. The problem is, if that reaction is devastation that your child has failed, it sends a message that your child can do nothing to learn and develop his/her abilities. As a result, children may disengage and instead do something "safer" - something at which they know they will succeed. They may miss the opportunity to grow and challenge themselves - challenges which have many cognitive and emotional benefits.

What this means is, if we want to avoid having our children develop a fixed view of intelligence, we have to change our own view of intelligence - not just in what we say. How do we do that? Unsurprisingly, Carol Dweck, who developed the concept of self theories, has designed an intervention called Mindset, though it is aimed at students. But perhaps another way is to adapt an approach used in cognitive therapy and similar interventions: self-monitoring and mindfulness.

In these approaches, the individual monitors his or her thoughts for instances of negative self-talk. They are not trying to suppress those thoughts - because we know that can backfire. Instead, when they encounter those thoughts, they practice acceptance of any mistakes they made that led to that self-talk and may even come up with rebuttals to those negative thoughts. You can read a little more about mindfulness and negative self talk here. In fact, as you'll see in the article, there are many common threads between mindfulness and incremental views of intelligence. For instance, the article states:


People with good self-esteem see mistakes and failures as opportunities to learn about themselves. They take a "beginner's mind" approach - putting aside the judgements and conclusions from past behaviour and actions and, instead, thinking about what they've learned from these experiences.

And for a humorous approach to defeating negative self-talk, you could try this: 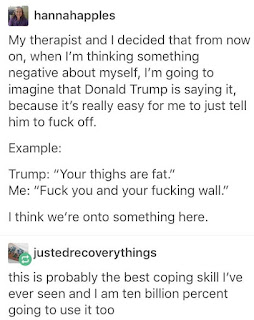