In April, I blogged about the minimal group paradigm - basically, how we form groups with people based on common characteristics. While we can form groups for any random bit of information, like what painting someone prefers, some characteristics are more important to us than others. That is, we consider some characteristics part of our core identity. These are the things that we tend to mention when people say, "Tell me about yourself."

In addition to being a woman, a social psychologist, and a singer (all important parts of my identity), I am a beer lover. I love trying new beers and new breweries. I'm especially a fan of porters, stouts, and sour ales, and will drink pretty much anything described as "barrel-aged."

So discovering that someone else is also a beer lover is like finding a kindred spirit. Friday, a coworker invited me to join a group for an after work outing. I considered going home, sitting on my couch, and reading - it had been a busy week and I needed some me-time. But then I saw the plan was to go to a local brewery called "Exit Strategy." (I had to laugh that I was trying to come up with an exit strategy to avoid going to Exit Strategy. Turns out the founders of Exit Strategy, the Valleaus, quit their jobs to start the brewery - the business was their exit strategy.)

I got online and checked out their website. First of all, awesome beer names, like Judgmental Dick and Nobody Reads the Copy. Second, old-fashioned posters for their beers: 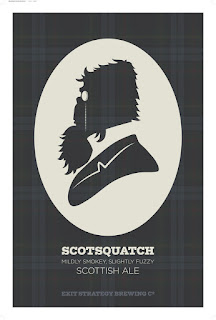 So I decided I had to check this place out, and headed over right after work. First, I'm very glad that I used Google Maps turn-by-turn directions, instead of just looking up the address, because Exit Strategy is in such a nondescript brick building that I nearly drove by it (and would have if Google hadn't said, "Your destination is on the right"). That's my only complaint about the whole experience.

Parking is really easy to find on the street. The inside is super-cute: 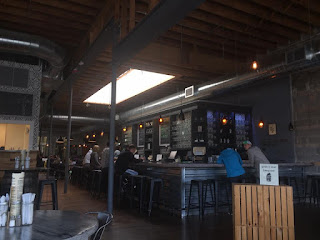 It's a brewpub, so they also had food. I ordered the giant pretzel (sadly, didn't think to take a picture) - it's not just a name. This pretzel took up an entire metal tray. Next time, I'll probably plan on sharing it with someone.

Plus I got to bond with the coworker who organized the event, and learn about her favorite beers. Turns out we have many of the same tastes in beer, including our mutual love of stouts and porters. So the whole night was a win.
by Sara at 8:00 AM