The Language of Music

I come from a very musical family. Both of my parents were in choirs in school, my brother writes and performs music, and music was almost always playing at home or in the car. So it's unsurprising that I developed a love of music very early in life - my mom would argue from infancy - and kept making music continuously up to now, on the piano or my flute, or with my voice. Even after I changed my major from theatre to psychology, I kept performing in my college choir.

Most of my friends are also musicians, or musically inclined, and I married a fellow musician. So music is, and probably always will be, an important part of my life. As a psychologist, though, I'm always fascinated by the experience of music and the brain activity involved with listening to or producing music. This is especially true because I notice that my husband and my experiences of music seem to differ from each other, and I think it comes down to brain activity.

Just to note some of the social differences between us: my husband minored in music, plays piano and organ incredibly well, and is at ease with many styles, including jazz, classical (choral and orchestral), showtunes, and church music/hymnity. My exposure growing up was mainly to classic rock and showtunes, my (minimal) vocal training is in musical theatre, and I played the flute in my school band (so lots of pep band/marching band music).

My husband loves listening to music when he's working or reading. I listen to a lot of music during the day, but if I'm reading or writing and need to do some heavy cognitive processing, I find the music can be distracting. But I also notice that this occurs, regardless of whether I'm listening to music with words or without. That is, it seems that my language center in my brain is processing the music, even when it's instrumental.

I'm not the first to notice this connection. Brown, Martinez, and Parsons (2006) examined the similarities of music and language in the brain. Their participants were amateur musicians, who heard snippets of melody and spoken phrases, and were asked to improvise melodies or phrases based on those snippets. Positron emission tomography (PET scan) was used to look at brain activity during these activities.


Direct comparisons of the two tasks revealed activations in nearly identical functional brain areas, including the primary motor cortex, supplementary motor area, Broca’s area, anterior insula, primary and secondary auditory cortices, temporal pole, basal ganglia, ventral thalamus, and posterior cerebellum. Most of the differences between melodic and sentential generation were seen in lateralization tendencies, with the language task favouring the left hemisphere. However, many of the activations for each modality were bilateral, and so there was significant overlap.

To put this in more common language, they found overlap in many major brain areas - including Broca's area, the so-called language center of the brain - and also found that, while language tasks tended to involve the left hemisphere of the brain, which is where the language center is located, more heavily than music tasks, they both showed activities in both sides of the brain. In fact, while I was looking into the specific brain areas involved, I found this article, which references this handy graphic: 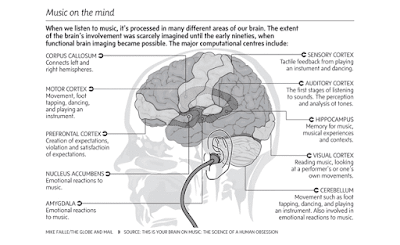 So one possibility is that music activates my language center more heavily, which makes it difficult to complete another linguistic task at the same time. Another potential factor is choice in music. At home, if I'm reading or writing, I'm usually at my desk or on the couch with a book or laptop, while my husband is at the "main" computer, where we store our music files. So in this scenario, he's in charge of what music we listen to. It's possible that the distraction factor is because I didn't select the music. We may react differently to music we are "forced" to listen to and music we select. This could be one reason why Christmas music is so annoying.

In any case, research shows that music is a linguistic task. Not only that, it activates many areas of the brain, including the motor cortex (we tap our feet or dance), the amygdala (we feel emotions in response to the music), and the hippocampus (we associate memories with the music). There are so many positive impacts of music on brain and skills development. Even in those few instances where I find music distracting, I know it has made me a better person.

Tonight, my choir, the Apollo Chorus of Chicago, is performing the first of two concerts featuring music of Broadway. If you're in the Chicago area, be sure to check it out!
by Sara at 8:00 AM