P is for percent

We've used ggplots throughout this blog series, but today, I want to introduce another package that helps you customize scales on your ggplots - the scales package. I use this package most frequently to format scales as percent. There aren't a lot of good ways to use percents with my dataset, but one example would be to calculate the percentage each book contributes to the total pages I read in 2019.
The new variable, perpage, is a proportion. But if I display those data with a figure, I want them to be percentages instead. Here's how to do that. (If you don't already have the scales package, add install.packages("scales") at the beginning of this code.) 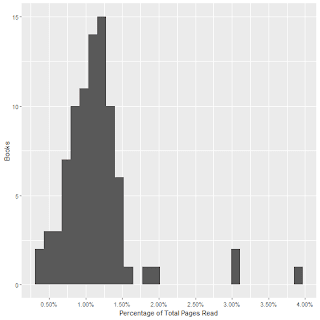 You need to make sure you load the scales package before you add the labels = percent attribute, or you'll get an error message. Alternatively, you can tell R to use the scales package just for this attribute by adding scales:: before percent. This trick becomes useful when you have lots of packages loaded that use the same function names, because R will use the most recently loaded package for that function, and mask it from any other packages.

This post also seems like a great opportunity to hop on my statistical highhorse and talk about the difference between a histogram and a bar chart. Why is this important? With everything going on in the world - pandemics, political elections, etc. - I've seen lots of comments on others' intelligence, many of which show a misunderstanding of the most well-known histogram: the standard normal curve. You see, raw data, even from a huge number of people and even on a standardized test, like a cognitive ability (aka: IQ) test, is never as clean or pretty as it appears in a histogram.

Histograms use a process called "binning", where ranges of scores are combined to form one of the bars. The bins can be made bigger (including a larger range of scores) or smaller, and smaller bins will start showing the jagged nature of most data, even so-called normally distributed data.

As one example, let's show what my percent figure would look like as a bar chart instead of a histogram (like the one above). 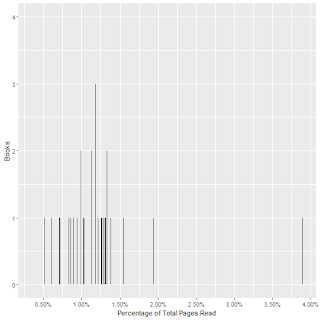 As you can see, lots of books were binned together for the histogram. I can customize the number of bins in my histogram, but unless I set it to give one bin to each x value, the result will be much cleaner than the bar chart. The same is true for cognitive ability scores. Each bar is a bin, and that bin contains a range of values. So when we talk about scores on a standardized test, we're really referring to a range of scores.

Now, my reading dataset is small - only 87 observations. What happens if I generate a large, random dataset? 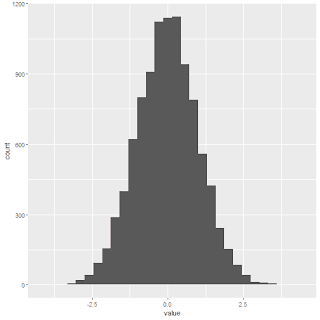 See that "stat_bin()" warning message? It's telling me that there are 30 bins, so R divided up the range of scores into 30 equally sized bins. What happens when I increase the number of bins? Let's go really crazy and have it create one bin for each score value. 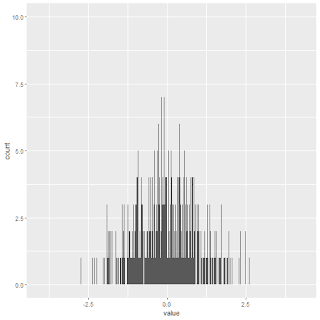 Not nearly so pretty, is it? Mind you, this is 10,000 values randomly generated to follow the normal distribution. When you give each value a bin, it doesn't look very normally distributed.

How about if we mimic cognitive ability scores, with a mean of 100 and a standard deviation of 15? I'll even force it to have whole numbers, so we don't have decimal places to deal with. 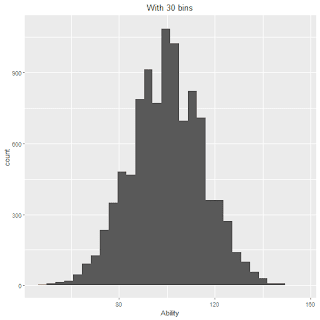 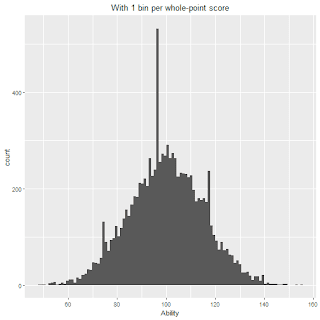 (Now, there's more that goes into developing a cognitive ability test, because the original scale of the test (raw scores) differ from the standardized scale that is applied to turn raw scores into one with a mean of 100 and standard deviation of 15. That's where an entire field's worth of knowledge (psychometrics) comes in.)

This is not to say histograms lie - they simplify. And they're not really meant to be used the way many people try to use them.
by Sara at 9:00 AM