According an interesting article from FiveThirtyEight, more people are resigning from Congress recently than we've seen at any other point in the last 117 years:


The 115th Congress owes its historic turnover to the confluence of two events, one normal and one abnormal. First, there’s the start of a new presidential administration. Five of the first six members to resign this session did so to accept jobs in President Trump’s administration. That’s not unusual. It’s similar to the seven members who resigned in 2009 to join the Obama administration and the five members who left in 1993 to join Bill Clinton’s.

But in addition, three of the four most recent members to resign from the 115th Congress did so because they were accused of unwanted sexual advances: John Conyers, Trent Franks and Al Franken.

The article features this graph, which shows number of resignations and reasons over time, annotated with major events occurring at that time: 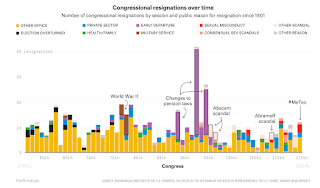