Now we’ve learned, via Consequence of Sound, that in admiration for the rock icon’s favorite books, his son, director Duncan Jones, has launched the “David Bowie Book Club.”

My dad was a beast of a reader. One of his true loves was Peter Ackroyd’s sojourns into the history of Britain & its cities. I’ve been feeling a building sense of duty to go on the same literary marathon in tribute to dad. Time allowing...#Read-ItBig’nsTheBrain
— Duncan Jones (@ManMadeMoon) December 27, 2017

The book club will stick to Bowie’s 100 favorite books from the previously mentioned list, and the first book to be discussed will be the 1985 novel Hawksmoor by Peter Aykroyd, an author who Jones says was one of his father’s “true loves.” If you want to follow along with the book club, the deadline to finish the 288 page novel is February 1, so you better get to your local library or hit up your local bookseller or Amazon soon.

In the meantime, I took a quick inventory of all the books I own that have languished on my to-read pile(s) and also just received a literal box o' books from my parents for my birthday (in addition to all the books I received for Christmas). I'm probably good for a while. But I may try to get to Hawksmoor before February 1. Thanks to my no-book-buying resolution, I'll have to check out my local library. 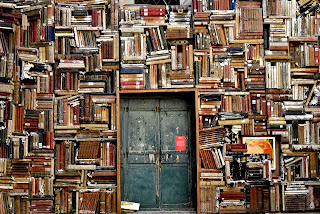