Through pictures, poems, ballads and stories we are able to watch the British ghost as it changes from violent revenant to suffering soul, from admonitory corpse to demonic illusion, from moral teacher to visual spectacle, from historical ambassador to translucent spectre, from fearsome presence to reassuring historical spirit. In whatever ways ghosts choose to manifest themselves in reality, it is in the imagination that they have the most varied and revealing existence. It is here that ghosts hold up a mirror to us, one that reveals our desires and fears.

The Ghost: A Cultural History by Susan Owens, p. 269 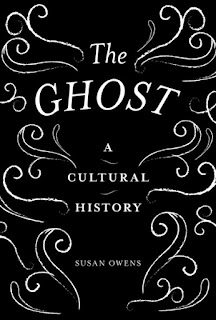 I just finished tearing through The Ghost. (I blogged about this book shortly after I first learned about it, so it's great to follow-up with a review.) Though Owens first introduces us to the subject of ghosts with one of the most famous examples in literature - Marley's Ghost in A Christmas Carol - she quickly takes us back to the year 1014, with a story of an attack on (and death of) the Danish conqueror Sweyn Forkbeard by East Anglican king, St. Edmund, who died in 869. From there, Owens takes us through the history of ghosts: how they are portrayed and thought of in both fictional and nonfictional stories.

In the past, ghosts dolled out punishment to wrong-doers, serving as a sort of karmic balance. In some regards, that isn't too different from our conception of ghosts in popular culture - people who died through some injustice or with important business unfinished. But the way ghosts could manifest themselves changed drastically over the centuries. Prior to the Protestant Reformation, ghosts were often souls that had escaped (temporarily) from purgatory, and were asking anyone they encountered to pray for them so they could be released. The Reformation changed that by doing away with the idea that souls went to purgatory, rather than directly to heaven or hell. Early ghosts were also basically zombies - they were corporeal and solid and could be/were mistaken for the living at times.

During this time, attire of ghosts also changed, from death shrouds and white billowy fabric (sheets, anyone?), to clothing they were seen wearing when they were alive.

Ghosts were also inextricably linked to technology. Ghosts went from being solid and corporeal to ethereal and translucent around the time entertainers figured out how to put on light shows that projected reflected images of actors - images that were ethereal and translucent. Painting also influenced this conception, with the switch from oil paint to water colors.

As technology advanced, giving us telegraphs and electricity, ghosts also changed form. Authors imagined telegraphs and phone calls from ghosts, and today's ghost hunters insist that ghosts give off electromagnetic fields that can be picked up with EM monitors. They look for ghostly messages in television static and EVP. Over and over, the book challenged things I had even accepted as standard folklore. In fact, the tendency for horror movies to punish people who disobey social norms comes from the influence of Victorian ghost stories - a time period when stories were easily obtained and thus very popular, and a period of supernatural tales that was revisited beginning in the 1950s.

But at the heart of the book is why we find ghosts so fascinating and enduring. Though our belief in other supernatural beings, like vampires, evil witches who sold their souls to the devil, and demonic possession as an explanation for physical illnesses, have thankfully changed over the centuries, one could argue that ghosts are as much an enduring belief today as they were then. I don't want to give away too much, since I highly recommend you check out this book for yourself, but the big takeaway I got from the book is that ghosts are an enduring belief because the past is always there - not just in our memories but as a physical presence, in the form of old houses, ancient structures, and dark forests. Every person who has ever lived is still on this earth in some form. And people leave a mark on the places they've been and the people they interact with.

My one complaint is that the book was a bit slow at the beginning, or rather, I was slow to get into it when I first started. It felt as though she jumped from her own narrative to quotes far too often, and I wanted to hear more about her own thoughts and analysis. But once I got about 10-25% of the way through, I found I had fallen into a nice rhythm and had come to appreciate her blending of literary quotes with analysis and commentary. So if you also find it to be a slow read at first, try to push through and I think you'll enjoy it as much as I did.
by Sara at 5:36 PM