Two graphs are currently open in my browser today, both of which deal with color - one deals with political affiliations (red Republicans and blue Democrats) while the other deals with lightsabers.

First, the graph of political affiliation, shared via Andrew Gelman: 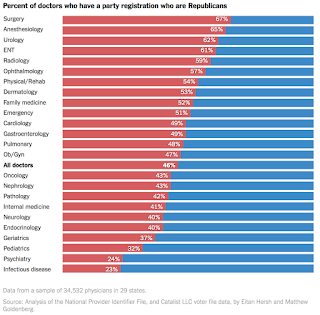 Specifically, this chart displays results from two datasets: one from the National Provider Index, which lists physicians in the United States; and state voter files, which provide voter registration data including political affiliation. They were able to match these two files to create one dataset of political affilitation for 55,000 physicians residing in 29 states. As you can see in the graph above, there appears to be differences in political affiliation by physician specialty, hence the title of the original article: Your Surgeon Is Probably a Republican, Your Psychiatrist Probably a Democrat.

The second graph just brings me joy, because I'm super-excited to see The Last Jedi Thursday (also: tired of dodging spoilers). In honor of the new Star Wars movie, FiveThirtyEight gives us this graph of number of lightsabers by color in both canon and extended universe: 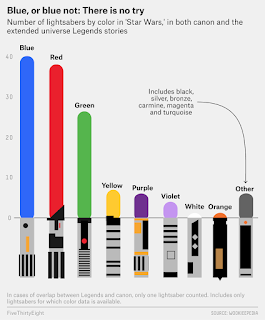