Via Mashable, Botnik Studios, a creative community, just gave us a new Harry Potter chapter, that was written using a predictive algorithm trained on the seven Harry Potter books: 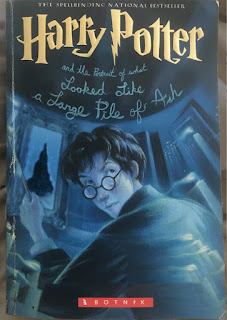 And it's hilarious. Here are a few excerpt:


"What about Ron magic?" offered Ron. To Harry, Ron was a loud, slow, and soft bird. Harry did not like to think about birds.

"Voldemort, you're a very bad and mean wizard," Harry savagely said. Hermione nodded encouragingly. The tall Death Eater was wearing a shirt that said, 'Hermione Has Forgotten How To Dance,' so Hermione dipped his face in mud.

The pig of Hufflepuff pulsed like a large bullfrog. Dumbledore smiled at it, and placed his hand on its head: "You are Hagrid now."