Back in October, the European Space Agency’s Schiaparelli lander was supposed to touch down gently on the surface of Mars: 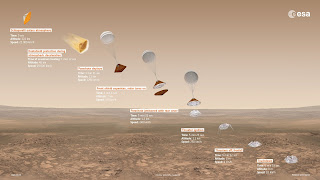 Instead, it free fell, reaching speeds of 185 mph, before crashing into the surface. And now, the ESA may know why:


As it was making its slow descent, Schiaparelli’s Inertial Measurement Unit (IMU) went about its business of calculating the lander’s rotation rate. For some reason, the IMU calculated a saturation-maximum period that persisted for one second longer than what would normally be expected at this stage. When the IMU sent this bogus information to the craft’s navigation system, it calculated a negative altitude. In other words, it thought the lander was below ground level. Ouch.

That fateful miscalculation set off a cascade of despair, triggering the premature release of the parachute and the backshell, a brief firing of the braking thrusters, and activation of the on-ground systems as if Schiaparelli had already reached the surface. This all happened while the vehicle was still two miles (3.7 km) above ground, causing a catastrophic free fall that sent the lander plummeting downward at 185 mph (300 km/h).

And here's the expensive crater it left behind: 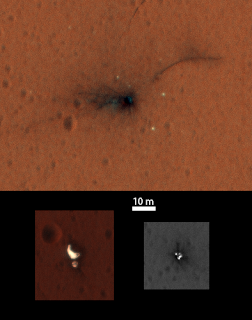 As you may recall, this mission was simply a dry run to demonstrate the technology and identify/correct any bugs. And the behaviors that led to the miscalculation have been replicated in computer simulations, meaning they could be correctable in time for the next mission in 2020. A full report of the investigation into the crash and the conditions leading up to it, is supposed to be out early next year.
by Sara at 9:06 AM