In 1992, Hillary Clinton, who was receiving harsh criticism for continuing to pursue her career while also serving as first lady of Arkansas and the wife of a Presidential candidate, was quoted as saying this: 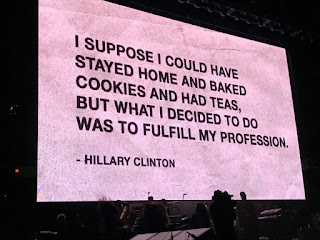 The quote was controversial at the time. Recently, at a get-out-and-vote rally in Cleveland, Beyonce gave a heartfelt speech about why she supports Clinton and the message Clinton's candidacy sends to girls and women everywhere. In addition, this quote was projected on a large screen (photo above).

Unfortunately, the quote is still causing some uproar from people who argue it is denigrating women who are homemakers and stay-at-home moms. My mom stayed home, although not by choice. She wanted a career but a disability prevented her from working for very long. She was - and still is - a great mom, who taught me a lot, and I cherish the time we spend together. She stayed very involved as a volunteer at my school. She did more with her time than probably most stay-at-home moms, and still found time to write children's stories, poems, and books.

Though I know the same thing could happen to me, where I am forced to become a stay-at-home mom, despite my ambition, my focus is on my career, which I have no intention of giving up if and when I have children. But I don't read this quote as downplaying the important work stay-at-home moms and homemakers do. Instead, I read this quote as "I suppose I could have done what society expects of me, but what I decided to do was what I wanted." It's about having a choice, and not being forced by others and social norms to follow one path.

Perhaps the people who are "outraged" would have preferred Hillary to have stayed home, because then she certainly wouldn't be where she is today, a candidate for President. But I have to laugh that the people who are so easily offended by this one sentence can support a man who only knows how to say offensive things.
by Sara at 4:10 PM