Trust in a Post-Truth World

The Oxford Dictionaries have announced the 2016 word of the year:

The concept of post-truth has been in existence for the past decade, but Oxford Dictionaries has seen a spike in frequency this year in the context of the EU referendum in the United Kingdom and the presidential election in the United States. It has also become associated with a particular noun, in the phrase post-truth politics. 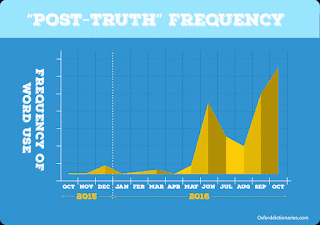 A recent article in The Guardian tied this concept to the notion of trust, and discusses results of the Ipsos Mori 2016 Veracity Index, which assesses level of trust in different societal roles. Unsurprisingly, politicians are among the most distrusted, and saw their trust rating fall this year to 15%. Who are the most trusted? Nurses, at 93%, followed closely by physicians at 91%:


The stellar 93% rating for nurses was warmly welcomed by Janet Davies, chief executive and general secretary of the Royal College of Nurses. “Nurses are some of the most caring, hardworking staff in the UK and it is very encouraging to see their efforts reflected in the eyes of the public,” she said.

“A trusting relationship is absolutely essential in healthcare. As pressures on the health service rise, it’s particularly positive that the public have maintained their faith in the frontline staff working tirelessly for them throughout these difficult times. These results highlight the critical role nurses play in the lives of people in the UK.”

Here are the full results (and access more details here):