Oversharing in the Age of Social Media

Self-disclosure is how we build strong relationships with others. By telling someone else about your inner world, you are showing that you trust them and can build a deeper connection with them, especially when they, in turn, show you their inner world back (which people are generally inclined to do, through a concept known as reciprocity). In fact, there are many explanations for why self-disclosure improve bonds - not just the trust it displays, it also often provides information that may show you have something else in common with someone (putting them more strongly in your in-group, which you are biased to evaluate positively). Sharing also increases the perception that a person is trustworthy. In fact, research has shown that people who self-disclose are evaluated more positively than people who withhold information, even when the information disclosed is really terrible (like failing-to-tell-someone-you-have-an-STD terrible).

The advent of Facebook and other social media sites provide many opportunities to share information about oneself, but as many have observed, it also provides an avenue to overshare. Now any thought you had, any activity you did, can be broadcast to all of your friends, or an even larger audience if a post is "public." And people use social media to share things with the world that they would never dare shout in a crowded room, even though it's basically the same thing (and arguably worse unless someone in that crowded room is recording the whole thing). But why? Researchers offer some answers, and they're pretty much what you would expect (if you know about social psychology):


Social scientist and author Sherry Turkle thinks we’re losing a healthy sense of compartmentalization. Last year, researchers at Harvard found that the act of sharing our personal thoughts and feelings activates the brain’s neurochemical reward system in a bigger way than when we merely report the attitudes and opinions of others. Meanwhile, Elizabeth Bernstein of the Wall Street Journal asked around and concluded that our newfound urge to disclose is partially due to not only the erosion of private life through the proliferation of reality TV and social media, but also due to our subconscious attempts at controlling anxiety.

“This effort is known as ‘self regulation’ and here is how it works,” she writes. “When having a conversation, we can use up a lot of mental energy trying to manage the other person’s impression of us. We try to look smart, witty, and interesting, but the effort required to do this leaves less brain power to filter what we say and to whom.”

Another crucial ingredient encouraging online exhibitionism is, as stated by [Russell W.] Belk, [chair in marketing at York University in Toronto], the “tension between privacy and potential celebrity.” For some people, the longing to be popular far outweighs the longing to be respected, and their social media accounts can verify this.

I would also add that many people don't think through the gravity of what they share online. They're in a situation where they can impulsively share whatever they want, but don't think through the potential consequences. For instance, I would assume most people know not to let all their friends take a picture of their credit card, while adding, "BTW, the code on back is...", and yet, there are countless people who have posted a picture of their credit card on their social media (along with, "The code on back is... Why is everyone asking me that?").

A few years ago, my mom posted an unedited picture of her passport online, because she was happy to finally have one. Since I get notifications when she posts something, and I know her username/password (guess who set it up for her), I was able to login and delete it only a few minutes after it was posted. My mom is one of the smartest, most logical people I know, who would absolutely know better than to let a stranger take a picture of her passport. I don't think she made the connection that posting it on social media is basically the same thing. (A public post, no less! We had a convo about privacy settings after that.)

And I think the reason for that is because we perceive social media as a toy, something for entertainment value. We know better than to do some of these things in the real world, because that's our life, but Facebook is just something we do for fun. So while Sherry Turkle above may say we're losing a sense of compartmentalization, I would argue we're too compartmentalized in how we perceive social media. We're creating a division between real life with real consequences and online life for play, failing to realize that our social media activity also can have real consequences: having your credit card info "stolen" (or rather, giving it away without realizing it), losing a job, being put on a no fly list, all things that have happened.

Several years ago, I did a study on the potential negative effects of Facebook on mental health. When people asked me if the point of my study was to tell people not to use Facebook, my response was this: Facebook is a tool. A tool isn't inherently good or bad. It's a matter of how it's used. A hammer can help you build a house (good) or smash your finger (bad). The problem isn't the hammer, it's how you used it. 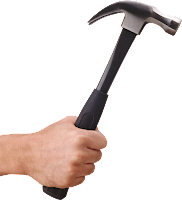