How Not to Put Together a Panel on Diversity in Animation

Recently, The Hollywood Reporter held a roundtable on "avoiding ethnic stereotypes and how to 'break the mold' of princesses." Here's who was involved:


"What are you doing here?" veteran animator John Musker jokingly asked Seth Rogen as the masterminds behind some of this year's eclectic lineup of animated features began to assemble at the Line 204 stages in Hollywood to talk shop. Not that anyone resented Rogen's presence, since Sony's saucy Sausage Party, on which he served as a writer, producer and voice actor, added some unusual R-rated spice to the mix. "That taco was amazing," laughed Mike Mitchell, 46, director of DreamWorks Animation's Trolls, as the group welcomed Rogen, 34, to their unique fraternity: filmmakers who can spend five years or more, sweating thousands of tiny details, to bring their visually inventive movies to the screen. Nor was Rogen the only newbie on the scene. Having attracted attention with his indie, live-action 2007 movie Son of Rambow, Garth Jennings, 44, made the transition to directing an animated feature with Illumination Entertainment's Sing. And though he's no newcomer to stop-motion animation — he's president and CEO of Portland, Ore.-based Laika and has served as an animator on several of its films — Travis Knight, 43, took the director's reins for the first time on Kubo and the Two Strings. They, in turn, were joined by experienced hands Musker, 63, whose credits range from The Little Mermaid and Aladdin to Disney Animation's just-released Moana; Bolt and Tangled helmer Byron Howard, 48, who was one of the directors guiding the anthropomorphic critters through Disney's Zootopia; and Mark Osborne, 46 (Kung Fu Panda), who helmed the screen adaptation of Antoine de Saint-Exupery's The Little Prince, appearing on Netflix.

Notice a pattern? That's right - they were all white men. 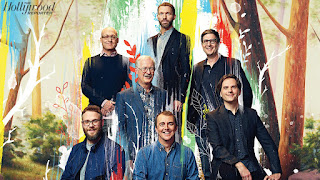 We're not saying that men can't understand diversity; just that a discussion on not only portraying women and minorities in animation, but how difficult it has been for women in particular to break into animation could perhaps benefit from having someone other than white men involved. Honestly, the lack of diversity in this roundtable is probably one of the best analogies for the lack of diversity in animation in general I've ever seen. Isha Aran at Fusion.net had more to say on the issue:


I would just like to take this time to remind everyone that it’s not like women aren’t trying. They just keep running into insane sexists. For instance, earlier this year, Adult Swim executive vice president and creative director Mike Lazzo explained the dearth of women in animation by claiming that “women don’t tend to like conflict, comedy often comes from conflict, so that’s probably why we (or others) have so few female projects.” (In unrelated news, comedian Brett Gelman recently cut ties with Adult Swim over its sexist practices.)

Why are we even asking these white dudes about this? I get that these men are at the top of the game, but the inclusion of Seth Rogen, who is not an animator, over someone like Sanjay Patel, a Pixar animator whose short Sanjay’s Super Team was nominated for an Academy Award, says a lot about any commitment to diversity. There was a big clamor about Zootopia’s roster of female animators—why weren’t any of them included?

And honestly, not everyone involved could even be described as "at the top of their game" - the description acknowledges newcomers Seth Rogen and Garth Jennings. Either of these two could have been replaced by one of the people Aran discusses.

Not to mention, the ways in which these filmmakers learned about the culture they were portraying in the movies Aladdin and Kung Fu Panda included visits to a Saudi Arabian expo at the LA Convention Center and Google, respectively. No, I'm not kidding.
by Sara at 9:21 AM