On Star Wars, Leia, and Coming of Age Stories

Not so long ago, in a city not so far away, I watched Star Wars: A New Hope for the first time. There were many viewings after that, and the Star Wars trilogy became part of my regular rotation of movies. Yesterday, after finding out the sad news that Carrie Fisher had passed away, I had many hours in our car ride home from the holidays to think about Star Wars and what it meant to me. Because though I went on to see many movies with Carrie Fisher, that was the first time I encountered her and her badass character - a character I could look up to, who was strong, intelligent, beautiful, and brave. For a little girl who at many times wished she could do "boy" things and felt stifled by many (though not all) of the "girly" things, her character meant a lot to me.

I think Star Wars meant a lot to many people I know, just as so many coming of age stories do. We were all Luke, wishing for bigger and better things, wanting to fight for something, to be brave and heroic. And we all secretly wished we could find out we were special somehow, with some power or ability that made us different from the rest - that gave us a purpose. The story of Luke developing his Force abilities appealed to us in the same way as (to name a more contemporary movie franchise) Harry Potter's magic abilities. I think that's one reason these stories are so enduring. And Luke's story is probably most meaningful to people who were themselves coming of age when they first encountered it - whether as children, teenagers, or young adults, trying to find themselves in the world.

The thing about Star Wars is, there's something in there for everyone, and on repeat viewings I see and experience new things. I have a personal "theory" that while coming of age stories appeal most to the young, the themes that become important to us in adulthood are stories about redemption. While there are many characters in Star Wars with redemptive goals, the best example is of course Darth Vader. At first, Luke wants to fight and defeat him. As he learns the truth about who Vader is, his goal changes to wanting to save him. And in some ways, Vader wants to be saved, but even then, believes it's too late for that. It's unlikely any of us have done anything as awful as what Vader did, but I think most adults have regrets - things they feel bad about and want to atone for in some way. Many of us think we've done too many bad things or gone too far to ever come back from it. But those stories of redemption resonate with us, and help show us that it's never too late to change for the better. It's those messages that appeal to me on repeat viewings of Star Wars now.

What hasn't totally changed over the years is my opinion of Leia. I loved her feistiness, her strength, her willingness to sacrifice for the greater good, and of course, that she had no problem grabbing the gun and basically rescuing herself when needed. I aspired to be like her, and it was wonderful to have a character who "looked like me" that I could look up to. I went on to adore many movies, shows, books, and so on featuring strong female characters. And Leia is also probably why my approach to flirting frequently involves teasing someone; I haven't called anyone a scruffy-looking nerf herder or a scoundrel though (not yet anyway), but you get the idea.

I probably sound like kind of a nerd for saying that when I heard about Carrie Fisher's heart attack, I said a little prayer that she would be okay. No, I don't know her. Yes, I know Leia isn't her only character. And yes in response to a blog post I saw circulating on Facebook (that I won't link to here but really hope the three ghosts of Christmas pay that blogger a visit soon), I realize that she was pretty hard on her body over her 60 years. But I really wanted her to be okay. One of her characters meant a lot to me - as a child and still today - and so she meant a lot to me. Over the years, as I learned more about her, I saw she really was someone I could look up to. Yes, she made her mistakes, if you want to call mental illness and addiction a "mistake," and like so many of us, she was working toward redemption, toward self-improvement. She was a writer who used her words as a way to heal and grow, and also to share her story and connect to others. To show all of us that we could come back from wherever we found ourselves, that our past is not who we are now. And she encouraged us to be proud of how far we had come.

And damn, did she have a way with words: 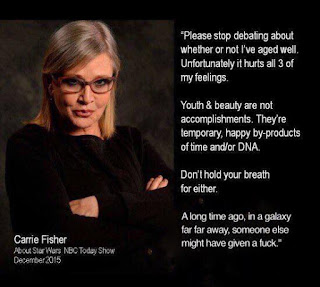