On Netflix Binges and Emily Dickinson

Yesterday I discovered a series called Black Mirror. It's an anthology show that started on Channel 4, before being picked up by Netflix for its newest season. The most similar show I can think of is The Twilight Zone, which I watched with my dad. Each episode features a stand-alone story with different actors and characters, but they clearly exist in the same universe. One bit of technology that exists across multiple episodes is an implanted device that allows the recording of memories, the ability to see the world through another's eyes through an uplink, and the power to block people completely - when you block someone, they appear as an outline filled in with gray: 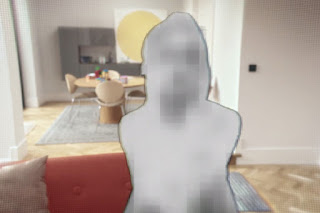 You can't see the person; you can't speak to them, in person or otherwise. Even looking at pictures of the person, or remembering events with them, all you see is the gray figure. One character said it was like having your memories vandalized. It's a world that encourages impulsive reactions to others, and those impulsive reactions have lasting consequences.

The current episode I'm watching, Nosedive, explores how people establish their self-worth through social media. In this world, people rate each other - their posts and their interactions. Even total strangers have the ability to rate a person who makes them smile or pisses them off. Your overall rating establishes your place in society, and impacts where you live, what job you can hold, and what medical treatment you can receive. As we follow the main character, Lacie, who is trying to raise her rating so she can get the apartment she wants, she encounters a string of bad luck causing her rating to plummet and everyone around her to shun her. It's much like the block, except now people look at your rating to decide if they're worth your time. They see you, but not really.

Either way, if you're blocked or down-rated, you're nobody. It reminded me of a poem by my favorite poet, Emily Dickinson:

How dreary to be somebody!
How public like a frog
To tell one's name the livelong day
To an admiring bog!

The message is clear: It's time to stop basing our self-worth on people who don't value us. That may mean accepting that you're nobody to someone. But in the end, what makes the character - and us - happiest are real interactions that aren't based on a momentary up/down judgment.
by Sara at 3:29 PM