Pokémon Do Not Pass Go

When the mobile game, Pokémon Go, was introduced, many people were excited about a game that forced people to get outside and get moving. In order to catch different varieties of Pokémon, hatch eggs, and train/fight in gyms, you pretty much had to go outside your home. While this is a great thing, people also noticed the downsides to this game, like encouraging trespassing or entering dangerous areas. Parks saw increased congestion and litter. 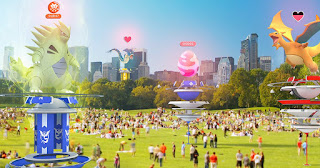 This is why Milwaukee decided to require permits for Pokémon Go playing public parks:


In February, the city started complaining about the congestion it was facing at its public parks. At one park in particular -- Lake Park which sits next to Lake Michigan -- there would sometimes be thousands of residents who would visit the local landmark, meet and greet other players, and enjoy one of the great natural formations of the United States.

In response, rather than buying more trash cans, the county enacted an ordinance that required the creators of Pokémon Go -- or any company that would ever want to create a similar game -- to register for a permit and pay a fee of up to $1,000. Wasserman said in the same story that legal action would be a possibility for noncompliance.

Obviously, this ordinance wouldn't affect individual gamers, but rather Niantic, the company that created Pokemon Go. But this ordinance is practically impossible to follow because of the information needed for the permit application - usually things like estimates of the number of attendees, a time period in which people would be present, and plan for cleaning up after the event. But the thing about Pokémon Go is that a person can play it whenever and wherever they want by opening the app. Though they might be able to gather some data on time periods in which players are in a particular park, it seems unlikely that Milwaukee would grant a blanket permit. There's also liability coverage event organizers have to carry.

So, not surprisingly, Milwaukee is being sued:


It still stands, though, which is why another augmented reality developer, Candy Labs AR, has brought forth a lawsuit against Milwaukee County, claiming the ordinance violates First Amendment rights. Under the legally binding rule, any augmented reality game that is played in a Milwaukee public park must be insured by the game developer to cover up to $1 million in liability coverage.

In other words, if someone playing Pokémon Go or any other type of game crashes his car into a park bench or even into a park employee, it would be the developer of the game -- in addition to the individual who crashed his car -- who would be responsible for the financial ramifications of that.

[A] preliminary trial date has been set for April 2018.