W is for Wilcoxon

This month, I've talked about types of variables and that most of the analyses you would learn about in an introductory statistics course are meant for interval or ratio data that is normally distributed. What do you do if your data aren't normal and/or are ordinal? You can thank Frank Wilcoxon for helping give you a solution to this dilemma. 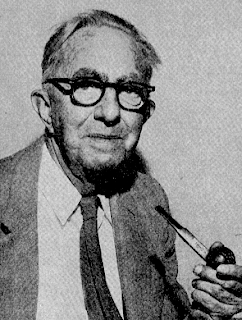 Wilcoxon was a chemist and statistician. He earned a PhD in physical chemistry, and worked as a researcher before going to work in industry for the Atlas Powder Company followed by the American Cyanamid Company. (Neither company exists anymore, but the American Cyanamid Company, which produced everything from pharmaceuticals to dyes to agricultural chemicals, was acquired mainly by Pfizer.) He was inspired to become a statistician after studying Fisher's work during his industry work.

He is best known for contributing two statistical tests that are similar to the t-test. The Wilcoxon rank-sum test is used for independent samples and the Wilcoxon signed-rank test is for dependent samples. But they work a little bit differently because they can be used on data that are not normally distributed, such as ordinal data.

Remember that independent samples mean the two groups are not at all overlapping nor paired in any way. The rank-sum test tests whether any value selected at random from one group will be greater than or less than a randomly selected value from the other group. So this will tell whether there is a reliable difference between the two groups without making any reference to the shape of the distribution. In fact, the rank-sum test, also known as the U test, can be used on normally distributed data, and will find very similar results as a t-test.

The signed-rank test is for dependent samples - samples that are paired in some way or that use one group of people who contributed pre- and post-intervention data. If you have normal continuous data, you would test this with a dependent samples t-test. Wilcoxon's version tests whether the two samples were drawn from populations with the same distribution (that is, they are distributed in the same way and thus the samples are interchangeable). Once again, it doesn't matter what the distribution is - normal or otherwise - because the test just compares the two samples.

People violate assumptions of normality all the time. Some tests are pretty robust and will work even if that assumption is violated. But there is almost always an alternative statistic or approach that will control for non-normal data.
by Sara at 9:00 AM