J is for Joint Probability

On an episode of House, Dr. House and his colleagues were discussing (as usual) a difficult case, one in which a woman appeared to have multiple rare diseases. As the doctors argued how impossible that was, House realized that it could absolutely happen, because, as he put it in the show: 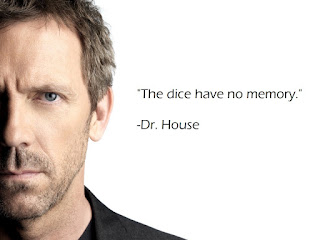 I love this quote, because it sums up an important probability concept so succinctly.

But this implies that the two events are connected. What if they're independent (which is what House meant when he said "no memory")? It's improbable, but absolutely possible, for two rare events to occur together. In fact, you can determine just how likely this outcome would be.

Remember Hillary's 6 coin flips? That's another demonstration of joint probability. In fact, you would find the probability of getting heads 6 times in a row as 0.5^6 (or multiplying 0.5 by itself 6 times). Based on that, we would expect 6 heads in a row to occur about 1.6% of the time.

I'll be talking about set theory later this month, which ties into many of these concepts.
by Sara at 9:00 AM

Email ThisBlogThis!Share to TwitterShare to FacebookShare to Pinterest
Labels: blogging a to z, math and statistics, trivial