As I said in my previous post, you can use control variables to get a clearer view of the effect of your independent variable on your dependent variable, by factoring out other noise. But control variables can also be used to make an even stronger case for a particular cause and effect relationship by showing that other explanations are incorrect. 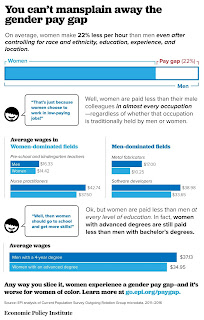 Statistically, the same thing is happening in either case. You're taking variables that may affect your outcome, but aren't the variables you're interested in studying, and factoring them out to get at the true relationship between your independent variable (or in this case, since we're looking at gender, which you can't manipulate, we would probably say predictor variable) and your dependent variable (wages). But in this case, you're seeing if the relationship goes away when you account for the alternative explanations. That is, if gender didn't directly affect wages, and it's instead because of differences in education, field, and so on, the gender difference would go away when these other variables are statistically controlled for. Even after controlling for these alternative explanations, women still have lower wages than men.
by Sara at 10:59 AM

Email ThisBlogThis!Share to TwitterShare to FacebookShare to Pinterest
Labels: blogging a to z, gender, math and statistics