How Important is Healthcare in this Election?

Pretty important, according to a recent poll by the American Journal of Managed Care: 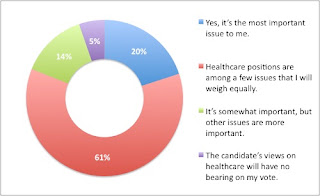 As this poll shows, 81% of respondents considered healthcare to be an important issue to them, either one they consider most important or one they consider with a small number of other issues. Obviously, the specific opinions about healthcare could vary among these respondents, with some voting for a candidate who would uphold certain policies, such as the Affordable Care Act, and others voting for someone they think would repeal or lessen the impact of ACA. Either way, candidates would do well to make their stance of these issues clear. Or you could just check out this site.
by Sara at 5:56 PM