Life in an Iron Lung

Those who forget the past are doomed to repeat it. And one of the situations where that aphorism is absolutely true is when it comes to vaccines. I feel very strongly about this topic, so strongly that I will feed the trolls even when I shouldn't and have unfriended people on Facebook who refuse to vaccinate their children.

No one dies from autism (or whatever anti-vaxxers are currently concerned about). But people die from preventable diseases that have been eradicated by vaccines all the time. Tens of thousands of people die from seasonal influenza each year. During the Spanish flu epidemic in 1918, 50-100 million people died from a strain of H1N1 - the same strain that reemerged in 2009 (the "Swine flu"). And other conditions we are vaccinated for, like the measles or diptheria, are far deadlier.

One of the most debilitating conditions for which we can vaccinate is poliomyelitis, or polio. People who survived polio went on to have a variety of complications, ranging from mobility limitations and muscle weakness to paralysis and severe difficulty breathing. Yesterday, Jennings Brown for Gizmodo published a story about 3 polio survivors who use an apparatus called an iron lung that helps them breathe. Two of them use the iron lung while they sleep, so they don't stop breathing in the night. One of them uses the iron lung nearly all the time. 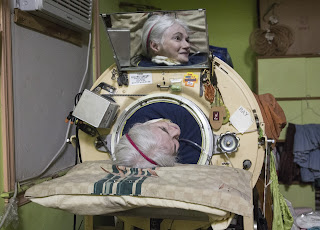 The stories these 3 told were heart-breaking:


When [Martha] Lillard was a child, polio was every parent’s worst nightmare. The worst polio outbreak year in US history took place in 1952, a year before Lillard was infected. There were about 58,000 reported cases. Out of all the cases, 21,269 were paralyzed and 3,145 died.

Children under the age of five are especially susceptible. In the 1940s and 1950s, hospitals across the country were filled with rows of iron lungs that kept victims alive. Lillard recalls being in rooms packed with metal tubes—especially when there were storms and all the men, women, adults, and children would be moved to the same room so nurses could manually operate the iron lungs if the power went out. “The period of time that it took the nurse to get out of the chair, it seemed like forever because you weren’t breathing,” Lillard said. “You just laid there and you could feel your heart beating and it was just terrifying. The only noise that you can make when you can’t breathe is clicking your tongue. And that whole dark room just sounded like a big room full of chickens just cluck-cluck-clucking. All the nurses were saying, ‘Just a second, you’ll be breathing in just a second.’”

The polio vaccine nearly eradicated cases in the United States. There are still cases in parts of the world where vaccines are not readily available. The article comments that if one infected person were to visit Orange County, California, where many parents are opting out of vaccination, we could have a polio epidemic in the US for the first time in decades.

New iron lungs haven't been manufactured in many years, and new parts aren't available any longer either. In the article, the author observes that these 3 polio survivors are fortunate to have mechanically oriented people in their lives who have fixed and maintained their iron lungs. Iron lung users who were unable to find people with these skills died as a result.

The most important message in this article, spoken by experts as well as the 3 survivors is vaccinate:


But another thing they all had in common is a desire for the next generations to know about them so we’ll realize how fortunate we are to have vaccines. “When children inquire what happened to me, I tell them the nerve wires that tell my muscles what to do were damaged by a virus,” Mona [Randoloph] said. “And ask them if they have had their vaccine to prevent this. No one has ever argued with me.”

[Paul] Alexander told me that if he had kids he would have made sure they were vaccinated. “Now, my worst thought is that polio’s come back,” he said. “If there’s so many people who’ve not been—children, especially—have not been vaccinated... I don’t even want to think about it.”

Lillard is heartbroken when she meets anti-vaccine activists. “Of course, I’m concerned about any place where there’s no vaccine,” she said. “I think it’s criminal that they don’t have it for other people and I would just do anything to prevent somebody from having to go through what I have. I mean, my mother, if she had the vaccine available, I would have had it in a heartbeat.”