November is a great month for books. First of all, it's NaNoWriMo. (I may have mentioned that before.) I had a great first day, writing over 5000 words! And I've already met my goal for today (which I set much lower because I knew I'd have less free time), over my lunch break. I'm back up to a higher word count goal tomorrow, since I'll be traveling and will have some downtime at the airport and on the plane. You can track my progress through my word count widget, which is at the bottom of the right column (just under the archive listing).

November is also the month you can vote on the Best Books of 2017 on Goodreads! I was thrilled to see many of the books I read this year on the lists, which are broken down by genre. The first round of voting is going on now. There will be a semifinal round starting next Tuesday, and a final round the following Tuesday. So get in there and vote!

Finally, some awesome books are coming out this month, including a parody Donald Trump autobiography, authored by Alec Baldwin and Kurt Anderson: 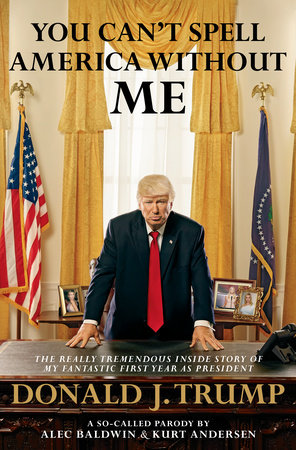 Other books I absolutely will read is a forthcoming biography of Stevie Nicks (Gold Dust Woman by Stephen Davis), a book about jellyfish (Spineless: The Science of Jellyfish and the Art of Growing a Backbone by Juli Berwald), and a novel about a group in Vermont who attempt to secede from the United States (Radio Free Vermont: A Fable of Resistance by Bill McKibben).
by Sara at 4:30 PM