Candy is Dandy But Liquor is Quicker

In yesterday's Chicago Tribune, Josh Noel longs for the day when beer tasted like beer:


After six hours wandering the aisles of the Festival of Wood and Barrel-Aged Beer last weekend, I have concluded that craft beer is betraying itself. It is forgetting what beer should taste like.

Though FOBAB, held this year at the University of Illinois at Chicago Forum on Friday and Saturday, remains Chicago’s most essential beer festival, corners of it have become a showcase for beer that tastes more like dessert than beer. “Pastry stouts,” the industry calls them.

Among the 376 beers poured at FOBAB this year, about 50 were pastry stouts, the largest share of the largest category at FOBAB. [These] beers are overrun with coffee, vanilla beans, coconut, cinnamon, chiles and cacao nibs.

So very many cacao nibs.

It’s a confounding moment in craft beer. The industry is still growing rapidly — 6,000 breweries operating and hundreds more in planning — and the race is on for differentiation. The problem is that the differentiation is seeming both too sweet and too repetitive.

I'll admit, I'm torn on this issue. I completely agree that many of these beers are far too sweet, not really tasting "like beer" but more like flavored syrup. But this isn't a new phenomenon. For instance, look at Reinheitsgebot, the German Beer Purity Laws, which were established centuries ago. I'm sure many of the beers Noel holds up as examples that "taste like beer" would fail to pass these purity laws.

If we go back to the very beginning of brewing - and that's a long way back, because beer is one of the first beverages humans produced; it even predates wine by about 2000 years - the first drinks we call beer are absolutely nothing like what we have today, brewed from barley and different kinds of grain. What makes something beer isn't so much about flavor or even the precise ingredients, but the process used to make it.

One of the reasons I love beer is the nuances of flavor. The many different varieties of beer have resulted from centuries of innovation. And I'm sure as each new style was invented, someone was lamenting for the days when the beer tasted like beer. While I may not love the pastry stouts, and instead prefer beers that are more dry or bitter, I don't see any issue with this new trend. It highlights exactly what I love about beer - variety.

Besides, I'll try anything barrel-aged, even if I worry it will be too sweet for me. 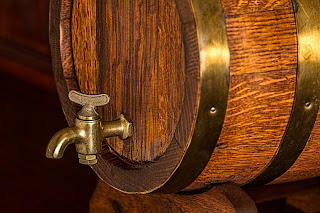