Comments Supporting the Repeal of Net Neutrality Are Likely Fake

Trump loves talking about the "millions of illegal voters." Well, there are millions of pro-repeal net neutrality comments that are very likely fake:


NY Attorney General Schneiderman estimated that hundreds of thousands of Americans’ identities were stolen and used in spam campaigns that support repealing net neutrality. My research found at least 1.3 million fake pro-repeal comments, with suspicions about many more. In fact, the sum of fake pro-repeal comments in the proceeding may number in the millions. In this post, I will point out one particularly egregious spambot submission, make the case that there are likely many more pro-repeal spambots yet to be confirmed, and estimate the public position on net neutrality in the “organic” public submissions.

Below, you can see in highlight some of the phrases that popped up again and again with highly similar syntax, and just a synonym switched out every once in a while: 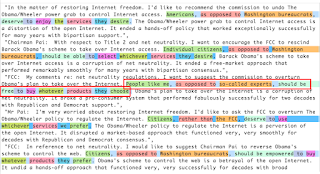 Also suspect is the fact that the pro-repeal comments are more duplicative than the anti-repeal comments, meaning if these 1.3 million similarly worded comments were coming from grassroots efforts, you should see lots of duplication in comments on both sides. People writing in favor of keeping net neutrality deviate much more from the form letter.

So what truth can be gleaned from these comments?:


It turns out old-school statistics allows us to take a representative sample and get a pretty good approximation of the population proportion and a confidence interval. After taking a 1000 comment random sample of the 800,000 organic comments and scanning through them, I was only able to find three comments that were clearly pro-repeal. That results in an estimate of the population proportion at 99.7%. In fact, we are so near 100% pro net neutrality that the confidence interval goes outside of 100%. At the very minimum, we can conclude that the vast preponderance of individuals passionate enough about the issue to write up their own comment are for keeping net neutrality.