The Rise of Craft Beer

Yesterday, CityLab posted a story by Joe Eaton on one of my favorite topics: beer. Part of the story he writes about Missoula, Montana, which has seven local breweries:


Good beer has joined fly-fishing and other forms of outdoor adventure as a cornerstone of the area’s tourism promotions and is increasingly central to the town’s branding as a hip Western recreational outpost. Accordingly, encouraging the growth of the local brewing industry has become a focus of the region’s economic development efforts.

Across the country, it’s the same story: Craft beer is on a tear, and cities as diverse as Bend, Oregon and Grand Rapids, Michigan have become destinations for connoisseurs of local suds. As Curbed’s Patrick Sisson recently detailed, small breweries have been heralded as economic drivers than can breathe life into the boarded-up downtowns of rural America and inject a hipster vibe—and money—into struggling neighborhoods of larger cities.

But despite the fizzy rise of craft beer in America, there are limits on the power of the industry to drive local economies. Just where that line lies is something that Missoula may soon be discovering.

But, as the article also points out, there's a lot of competition for business, and other than tourists coming to town to visit the taprooms, there's a limit to how much beer a town can consume. If an operation is very small and doesn't go into bottling and distribution, they depend on people coming to their taproom and not somewhere else. Although there's argument about whether this market is saturated, in some towns, it may be. Chicago can sustain multiple breweries, but maybe not Missoula, a town of 70,000 that, in addition to the seven breweries noted above, is getting two more.

Taprooms are also attacked for taking business away from bars, and strong voices in the community against bringing a taproom to their neighborhood has resulted in some silly compromise policies (including in Missoula): a 3-pint maximum and 8 PM last call.

Far from discouraging any readers who are thinking of setting up their own small brewery, the author discusses that some markets may have reached (or are in danger of reaching) saturation, but there are other parts of the country lacking in small breweries.

BTW, in reference to my previous post about Certified Independent Craft Beer, I was at Sketchbook Brewing in Evanston, IL earlier this week and saw this hanging on the wall: 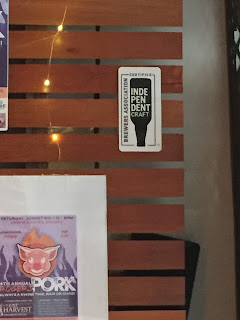