The Politicization of Worry

As I've commented before, there is a pattern in the US today for issues that were once non-partisan to become, well, partisan, and new research from Gallup suggests Republicans and Democrats are becoming more divided on issues like immigration, gun control, global warming, and satisfaction with K-12 education. 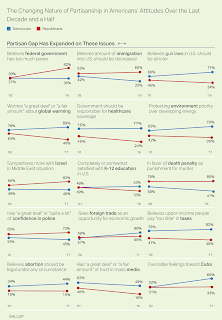 The gap has narrowed on issues of satisfaction with healthcare, though the reason for the shift is purely partisan: satisfaction is up for Democrats and down for Republicans, making them about equal. And currently Democrats and Republicans feel about the same way about the need for a third political party in our country, and whether smoking in public should be illegal. Further, the gap has not changed for several issues, including having children outside of wedlock (Democrats are more accepting, but now the majority of both parties are accepting of it), whether divorce is acceptable, and whether marijuana should be legalized.

But that's not all that's become political. According to a separate Gallup poll, Americans are worried, and though worry has decreased since the inauguration, it is still higher than pre-election levels for Democrats: 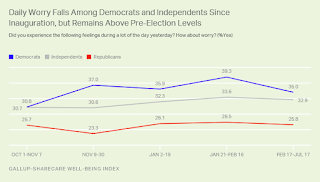