A few days ago, I finished reading The Lady Tasting Tea: How Statistics Revolutionized Science in the Twentieth Century by David Salsburg. 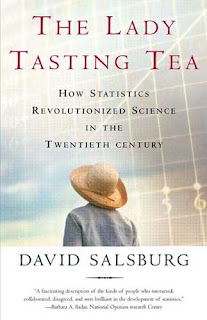 Since I shared in my statistics reading roundup that I would be reading this book, I thought I'd take a moment to write a quick review.

First, the positives. I learned a lot about the history of statistics, much of which I didn't previously know, and I learned some new names and approaches to look into. I liked that Dr. Salsburg tried to include statistical thinkers from multiple nations, including India and other countries that are often ignored in the more Western-focused discussion of the history of statistics, as well as women who have contributed in different ways. I was thrilled to read more about a person I had no idea was a self-trained statistician until I read about her in The Seven Pillars of Statistical Wisdom: Florence Nightingale. Not only did she use data to try to improve conditions for soldiers, her close family friends, the Davids, named their daughter (Florence Nightingale David) after her. F.N. David went on to make major contributions to statistics as a field.

Now, the not-so-positives. While the book was interesting, it lacked a coherent narrative, and had a tendency to jump around timewise and personwise. By the end, it felt like he was just cramming in names, statistical approaches, and events he couldn't find a place for, and it felt like I was being bombarded with stories that had little in common. Sometimes he would show different things that were happening at once in the same chapter and sometimes in different chapters, showing how other people worked their way into a situation previously discussed. This worked at times, but not always. I'm not saying the book would be better if it were more linear but a little more attention to timelines and organization might help make the story easier to follow, especially if the point of the book isn't really to divide the timeline up or advance some alternative interpretation of statistics as a field.

Also, I admit Dr. Salsburg said from the beginning that he wanted to write a book about the history of statistics for people who weren't statisticians (or even mathematicians), but in many cases he identified a revolutionary concept (e.g., degrees of freedom, maximum likelihood estimation) without describing even the basics of what it was to show why it was so revolutionary. Even though I think this book will mostly be picked up by people who are at least a little statistically savvy, some description of what these different terms mean seems warranted.

Still, if you'd like to learn more about the history of statistics, this book is a good place to start, but you'll need to look elsewhere to get a full sense of it.
by Sara at 8:00 AM