Climate Change and the Behavior of a Storm

Hurricane Harvey has been more devastating than most of us expected. As I stopped to grab breakfast on my way to work this morning, I saw an infographic on the front page of USA Today detailing just how bad things are in Texas in terms of the cost of the damage (to say nothing of the loss of human life): 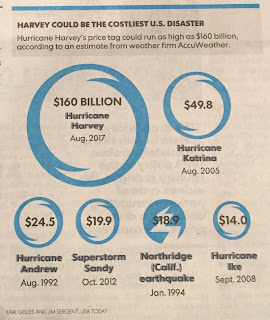 Part of the reason Harvey has been so devastating is because its behavior has been different from many previous hurricanes, and climate change may be to blame:


In the case of Harvey, which is dumping rivers of rain in and around Houston and threatening millions of people with catastrophic flooding (see photos), at least three troubling factors converged. The storm intensified rapidly, it has stalled out over one area, and it is expected to continue dumping record rains for days and days.

Hurricanes tend to weaken as they approach land because they are losing access to the hot, wet ocean air that gives the storms their energy. Harvey's wind speeds, on the other hand, intensified by about 45 miles per hour in the last 24 hours before landfall, according to National Hurricane Center data.

[Kerry Emanuel, an atmospheric sciences professor at the Massachusetts Institute of Technology,] analyzed the evolution of 6,000 simulated storms, comparing how they evolved under historical conditions of the 20th century, with how they could evolve at the end of the 21st century if greenhouse gas emissions keep rising. The result: A storm that increases its intensity by 60 knots in the 24 hours before landfall may have been likely to occur once a century in the 1900s. By late in this century, they could come every five to 10 years.

As the article points out, the big reason for all the damage is the amount of rainfall, resulting in flooding. That too is likely due to climate change. In fact:


Every scientist contacted by National Geographic was in agreement that the volume of rain from Harvey was almost certainly driven up by temperature increases from human carbon-dioxide emissions.

This is of course exacerbated by the fact that Harvey has stalled over land. Most hurricanes break apart or move off. Interestingly enough, the article notes that most climate scientists don't think this particular stall can be attributed to climate change, just bad luck; more research is needed, though, because some say climate change could result in changes in pressure fronts, which would impact how long a storm stalls in one place.
by Sara at 11:19 AM