On Charlottesville and Trump

As you probably already know, a rally calling itself "Unite the Right" convened this weekend in Charlottesville, VA, to protest the removal of a monument to Robert E. Lee. The rally quickly turned violent when a car was driven into an anti-racism protest organized as a response to the Unite the Right rally; 19 were injured and 1 was killed. Two state police officers called to assist with maintaining order also died in a helicopter crash.

Many were calling for the President to respond to the rally.


When the President eventually did respond, he failed to distance himself from these individuals and the organizations they represent, and emphasized that there was violence and hatred on many sides:

As Julia Azari of FiveThirtyEight points out, though Presidential responses to racial violence have always been rather weak, Trump's are even weaker.

I walk by Trump Tower in Chicago every day on my way to work. Here's what I saw in front of the building today: 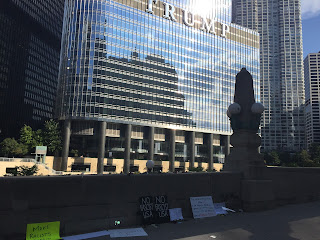 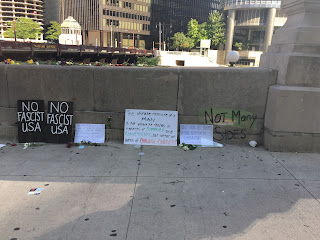