Statistics Sunday: How Does the Consumer Price Index Work?

You may have heard news stories about how much consumer prices have risen (or fallen) in the last month, like this recent one. And maybe, like me, you've wondered, "But how do they know?" It's all thanks to the Consumer Price Index, released each month by the Bureau of Labor Statistics. The most recent CPI came out Friday.

The CPI is a great demonstration of sampling and statistical analysis, so for today's Statistics Sunday, we'll delve into the history and process of the CPI.

What is the Consumer Price Index?

The CPI is based on prices of a representative sample (or what the Bureau of Labor Statistics calls a "basket") of goods and services - the things that the typical American will buy. These prices, which are collected in 87 urban areas, from about 23,000 retail and service establishments and 50,000 landlords and tenants, are collected each month, then weighted by total expenditures (how much people typically spend on each) from the Consumer Expenditure Survey. What they get as a result is a measure of inflation: how much the price of this sample of goods and services has changed over time. The CPI can also be used to correct for inflation (when making historical comparisons) and to adjust income (for industries that have wages tied to the CPI through a collective bargaining agreement).

What's In the Basket?

The basket is determined from the results of the Consumer Expenditure Survey - the most recent one was in 2013 and 2014. These data are collected through a combination of interviews (often computer-guided, where an interviewer contacts the interviewee in person or over the phone, and asks a series of questions) and diary studies (in which families track their exact expenditures over a two-week period). The interviews and diaries assess over 200 categories of goods and services, that they organize into 8 broad categories: 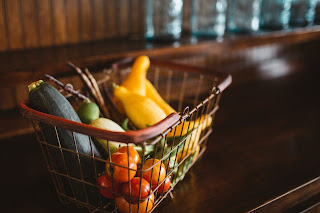 How is this Information Collected?

Believe it or not, the people who collect data for the CPI either call or visit establishments to get the prices. The data are sent to commodity experts at the Bureau, who review the data for accuracy, and may make changes to items in the index through direct changes or statistical analysis. For instance, if an item on the list, like a dozen eggs, changes in some way, such as stores selling eggs in packs of 10 instead, the commodity experts have to determine if they should change the index or conduct analysis to correct for changing quantity. This is a pretty easy comparison to make (10 eggs versus 12 eggs), of course, but when the analysts start dealing with two products that may be very different in features (such comparing two different computers or tuition from different colleges), the analysis to equalize them for the index can become very complex. So not only are items weighted to generate the full index, but statistical analysis can occur throughout data preparation for generating the index.

Data for the three largest metropolitan areas - LA, New York, and Chicago - are collected monthly. Data for other urban areas are every other month, or twice a year.

History of the CPI

The history of the CPI can be traced back to the late 1800s. The Bureau of Labor, which later became the Bureau of Labor Statistics, did its first major study from 1888 to 1891. This study was ordered by Congress to assess tariffs they had introduced to help pay off the debt from the Civil War. They were interested in key industrial sectors: iron and steel, coal, textiles, and glass. This is one of the first examples of applying indexing techniques to economic data.

From then on, the Bureau often did small statistical studies to answer questions for Congress and the President. In 1901 to 1903, they broadened their scope by doing a study of family expenditures, as well as analysis of costs from retailers, and applied the indexing techniques they had developed for industry to retail and living expenses. They published the results in a report called Relative Retail Price of Food, Weighted According to the Average Family Consumption, 1890 to 1902 (base of 1890–1899). Despite seeming quite dull from the title and subject matter, this report was actually quite controversial, because it highlighted a gap in growth in wages versus increase in cost of living - that is, wages had grown more than costs, resulting in increased purchasing power. But it was released during a banking crisis, where many people were laid off and wages were cut, so the Bureau was accused of being politically motivated in their research and conclusions.

As a result of the outcry, and budget concerns, research by the Bureau was halted in 1907, and was very limited in scope when it returned in 1911, assessing fewer items and using mail surveys from retailers rather than visits by Bureau staff.

New leadership in the Bureau and the beginning of World War I rekindled research efforts. They began publishing a retail price index twice a year in 1919. But the Bureau got a major redux thanks to the efforts of FDR's Secretary of Labor, Frances Perkins. She made efforts to modernize the organization and recruit experts in the fields of methodology and statistical analysis. Two major contributors were American economist and statistician Helen Wright and British statistician Margaret Hogg. In fact, Hogg conducted analysis that demonstrated the current weights used for the index were biased, by overstating the importance of food, and understating the importance of other goods and services, in the index. When they also made changes to the sample of prices to include, they had to hire more staff to go out and collect price data.

Other major changes in the history of the CPI included introducing an index specific to "lower-salaried workers in large cities" in the early 1940s, a gradual shift from a constant-goods (where the same basket is always used) to a constant-utility (where goods for the basket are determined by level of utility or satisfaction - that is, new useful goods can be added) framework from the 1940s to 1970s, and a partnership with the U.S. Census Bureau in the late 1970s. The first collective bargaining agreements - in which companies agreed to link workers' wages to the CPI to prevent strikes - occurred in the late 1940s and early 1950s.

Summing It All Up

Not only is the CPI an index of inflation - it represents cultural shifts in how we think about and consume goods and services. The shifting basket over time reflects changes in our day-to-day lives, the birth and/or death of different industries, and the changes in technology.

I'll admit, I wasn't really that interested in the CPI until I learned about the contributions of statisticians over the years. And it's an example of women making strong contributions to economic and statistical thought, so it's a shame that we don't hear more about it. In fact, statistician Dr. Janet Norwood, who joined the Bureau in 1963, and served as commissioner from 1979 to 1991, made some very important changes in her time there. For instance, a representative of the policy arm of the Department of Labor sat in on meetings about research results and press released from the Bureau - until Dr. Norwood stopped this practice to make sure economic information was seen as accurate and nonpartisan.

If you're now as fascinated as me, you can learn more about the CPI and its data here.
by Sara at 8:00 AM