But Is This Really Craft Beer?

Craft beer has become incredibly popular recently. For beer-lovers like me, this is a great trend, because it means I get to try new beers without having to go to specialized stores or visit tap rooms all over the country (though there are many maps available on the internet that show how you can go on the ultimate brewery road trip).

But as craft beer becomes more and more popular, you'll also see more large beverage manufacturers buying up small breweries, so they can cash in on those craft beer sales. But I think part of the reason that craft beer is so popular is because of the difference in flavor when a small brewery makes it, as opposed to the more homogenized (and frequently bland) choices from macro-breweries. And unless you follow beer news, you might not know when your favorite micro-brewery is purchased by a larger beverage manufacturer - and even if you know such a purchase took place, you might not know right away whether that will affect the taste of the beer.

So, how can you tell if what you're drinking is truly craft beer? Via The Daily Parker, this story from the Chicago Tribune details a new initiative by the Brewers Association to label Certified Independent Craft Beer:


More than 800 breweries — including Sam Adams, Sierra Nevada and New Belgium — will soon begin printing seals on their beers that identify them as "Certified Independent Craft." The initiative, which was spearheaded by the trade group for independent craft brewers, is intended to differentiate "true" craft beers from those made by the likes of MillerCoors, Anheuser-Busch and Heineken.

To qualify to use the seal, breweries cannot be more than 25% owned or controlled by any alcohol company that's not itself a craft brewer. Its annual production also can't exceed 6 million barrels. 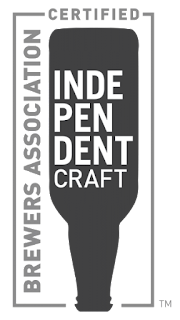 This afternoon, I'll probably hang out and enjoy some local craft brew - I've got half a growler left of Keweenaw Brewing Company's Level 92 black IPA in the fridge.
by Sara at 10:21 AM