How You Can Science Along During the Eclipse

As you may already know, a total solar eclipse will occur on Monday, August 21, following a stripe across the US from Oregon to South Carolina: 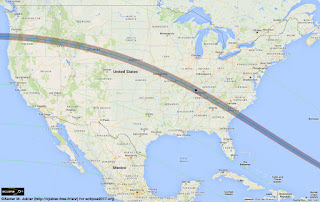 And according to Rebecca Boyle at FiveThirtyEight, some cool science is going to happen during the eclipse:


[S]cientists who study eclipses will be buzzing around their equipment to take the measure of the sun, its atmosphere and its interaction with our own atmosphere. An event that could inspire a unique sense of cosmic communion will also answer burning questions about how our star works and how it affects us.

By blocking the sun’s blazing light, the moon unveils the solar corona, a region that scientists still struggle to understand. The sun streams radiation and charged particles through a wind that it constantly blows in all directions, and while we know the solar wind originates in the corona, scientists are not sure exactly how, or why. An eclipse is one of the only times scientists can see the corona itself — and try to understand what it is throwing at us.

With new corona observations, scientists can feed new bits into computer simulations hungry for data on coronal action. This will improve models used for predicting space weather, said Ramon Lopez, a physicist at the University of Texas at Arlington.

Scientists will scramble to study all this as the shadow of the moon races across the country at an average speed of 1,651 mph. Scientists and students at 25 locations across the country will launch more than 50 weather balloons, which will take the temperature of Earth’s atmosphere. From orbit, a slew of spacecraft and the crew aboard the International Space Station will be watching and taking pictures. And scientists will fly in at least three airplanes, including a National Science Foundation jet that will measure the sun in infrared.

And if you're planning to watch the eclipse, whether in the path of totality or not, you can get involved with some of the science that will be going on during and because of the eclipse:


With an app called GLOBE Observer and a thermometer, you can collect data during the eclipse and submit it to NASA. And Google and the University of California, Berkeley, are asking for video and images, which they’ll stitch together into an “Eclipse Megamovie.”

If you want to watch the eclipse, you'll need a special pair of glasses to protect your eyes. And here's some additional guidance if you plan on photographing or filming the eclipse.
by Sara at 1:49 PM